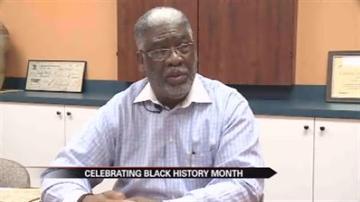 SOUTH BEND, Ind. -- A former South Bend Police Officer who once served as assistant to former Mayor Steve Luecke, spoke with ABC57 about concerns that there are few minorities in leadership roles in South Bend.

Walking through the Charles Martin Center, named after a man known for being a youth advocate and community servant, Lynn Coleman opened up about home.

"I love this community. I can't think of any place else I would rather be,” said Coleman.

At an early age, both Coleman and Martin quickly recognized the injustices surrounding a place they both grew fond of – South Bend.

"We still have an issue in this country, in this community with dealing with racial issues and how it affects different groups and cultures,” said Coleman.

As an officer on the South Bend Police force in the 1980s, Coleman helped form the "Minority Officers Group" to fight back against what he calls unfair and discriminatory practices within the department.

The group went on to file a lawsuit in federal court. A judge later ruled they couldn’t prove discrimination, but did suggest the city make some changes.

"Because of that, I believe we opened the door or caused some conversation around that whole issue of racism,” said Coleman.

"Whether they're reality of perceived issues, they're still there. One person’s perception is another person’s reality,” said Coleman.

The reality is, back to back in 2012, the city's African American fire chief Howard Buchanon retired. The police chief was demoted in a highly controversial wire-tapping case. The head of the Housing Authority, Marva Leonard-Dent, resigned amid allegations of sexual harassment.

"It causes people who might not be on the inside but are on the outside looking in, to say why?” said Coleman.

One of Coleman's biggest concerns at this point is representation and who is helping to make the big decisions for the city.

"You can't live in a community that has a high population of minorities, Asians, Hispanics and you don't see any of those people up top,” said Coleman.

When you ask around, there's something else causing a feeling of angst within the community, when it comes to a city's leadership roles - our children.

"They need to see people that look like them that are in different high profile positions in the communities in which they live in to give them something to inspire to be,” said Coleman.