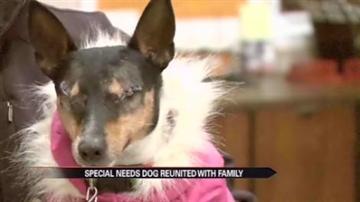 MICHIGAN CITY, Ind.--  Santa brought Christmas early for one special needs dog. When most dogs can rarely survive the December cold with predators around--one little dog survived without her sense of sight.

That's how Emma Young felt when she was reunited with her dog.

The rat terrier, named Lizzie, ran away weeks ago. Emma said she didn't think she'd make it because she's missing something.

"That she doesn't have no eyes and it's shut and her eyes are stitched on."

When the family adopted the dog off of Craigslist, the original owner didn't tell them she had a rare eye condition. Lizzie quickly lost all sight. Then when she got loose the family searched with no luck.

Then through a sequence of events, Lizzy's picture turned up in the paper.

"When my mom called me that night and we seen her in the paper I was just like, 'Oh my gosh' and I was so happy that she had been found," said Dayna Young.

Found by a school bus driver in a field not far from her home, the dog wound up at the Michiana Humane Society. By then her eyes were ulcerated and red.

"Everybody has been involved in this from Facebook, to our front page, to articles to now you guys," said Cathi Rogers, Michiana Humane Society. "We have tried to spread this message that we are not just here to adopt animals out, we're here to save them."

And save Lizzy they did. She was just minutes away from being put down for her painful eye condition. But an anonymous veterinarian completed the $800 surgery free of charge.

"She has won the hearts of so many people and I'm just so thankful that they've seen what I've seen in Lizzy," said Young.

Volunteers at the Michiana Humane Society say in all their years --this is a first.

"It's amazing how many people have said they've never heard of a story like this, they've never seen it come full circle where the dog is lost, we end up getting it, and somehow the owner finds the dog," said Rogers.