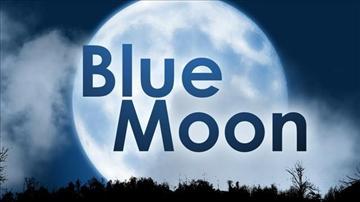 August 31 was a full moon, and the second time we had a full moon in the month of August.

Whenever I hear the term blue moon, I always think of the song.  But, the song has nothing to do with the full moon and it's timing in the season.  It has more to do with the singer's feelings.  He was feeling blue and happened to notice the moon and decide to sing to it.

Most people would associate the term with the phrase, "Once in a blue moon ".

Commonly, it means something that does not happen very often.

In terms of astronomy, a blue moon is the nickname for the third moon in a season that has four.

That sounds a little confusing, right?

Think of it this way.  There are four seasons in a year.  Each season is made up of three months.  So, there are normally three full moons each season (one each month).  When we have a blue moon, that means there is an extra moon in one of those months (for a total of four).

Most people think of it as the second full moon in one month.

It is a rare occurrence!

If you are a fan of astronomy, the next time we will see four moons in one season is next year, so the blue moon will happen on August 21, 2013.

For those who favor the two moons in a month definition of blue moon, you will have to wait a little longer!  The next time it will occur is July of 2015.

Either way, hope you enjoyed it!