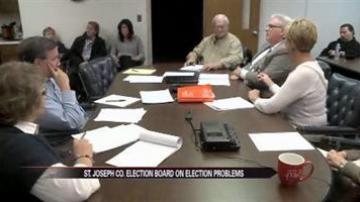 ST. JOSEPH COUNTY, Ind. -- During a meeting Thursday morning the St. Joseph County Election Board stepped up and accepted responsibility for the errors made during this month’s presidential election.

"There are certain places where the buck stops; and the buck stops with this board,” said Jim Korpal, St Joseph County Election Board Chairman.

Board members took one on the chin for a sloppy general election. Voters jammed phone lines trying to find out where they were supposed to go to vote, there were ballot shortages at several polling places and thousands of printed but unusable absentee ballots went to waste still wrapped in plastic.

"That's on us. That was a mistake that we should have gotten, because if that was in fact the case, if we were able to use those ballots we wouldn't have had a problem,” said Korpal.

The ballots were unusable because the board used a different machine for absentee voting and the ballots could not be read in any other machine.

Another issue happened at one Mishawaka precinct where some voters were given the wrong ballot.

The election board also apologized for that.

"The only way we could weigh in at this point is to make sure it doesn't happen again, and this is the problem; that it did happen again and it's happened before,” said Korpal.

In their opinion the best way to avoid this kind of human error is to transition to vote centers and away from precincts.

"They would get their specific ballot for their specific precinct; so there wouldn't be any question about, oh I've got three types of ballots here which one should I give you, and that's what we have now,” said Korpal.

Vote centers are expected to reduce the cost of elections to the county and provide increased flexibility and ease to the voter. They could also avoid problems like we had this year with people not knowing where to go to vote and running out of ballots.