Board hears arguments regarding officers suspension 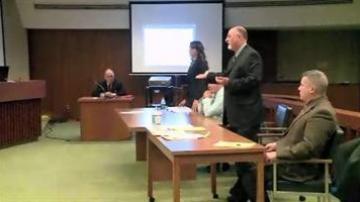 SOUTH BEND, Ind. -- A South Bend Police Officer is fighting his suspension. The Board of Public Safety heard arguments in the case concerning Jack Stilp’s suspension all day Friday.

For hours witnesses were called and testimony given.

"I did not order him that he could not talk to the press,” said Captain Terry Young, Stilp’s commanding officer.

The crux of the city's case is that Stilp revealed sensitive information by giving us his own officers report to verify his claims that Metro Homicide commander Tim Corbett threatened him.

"I felt it was important information that should have stayed within the police department,” said Lieutenant Lee Ross of South Bend Police Deparment Internal Affairs.

But when asked if Stilp's commanding officer terry young could have told him not to speak to the media, he acknowledged that missed opportunity.

"He could have said that."

Metro homicide commander Tim Corbett did testify but the defense was limited as to what he could be asked.

"The fact that Tim Corbett made threats against my client and nothing happened and he went public with it, and he gets suspended twice the penalty of the man who's already done this before. None of that's relevant to this hearing? You don't want to hear any of that information?" said Tom Dixon, Stilp’s attorney.

Ultimately, the city says the case is cut and dry.

"He's a grown man, he's responsible for his own decisions and he needs to be responsible for this one. I ask the board to find him guilty,” said Andrea Beachkofsky, Assistant City Attorney.

But Dixon says Stilp is a victim.

"We don't need to make Jack Stilp a sacrificial lamb to implement that policy and we certainly don't punish him because two reasonable people, or three reasonable people, have different notions of what sensitive information is and what it isn't,” said Dixon.

The Board of Public Safety will reveal their decision at their next public meeting.