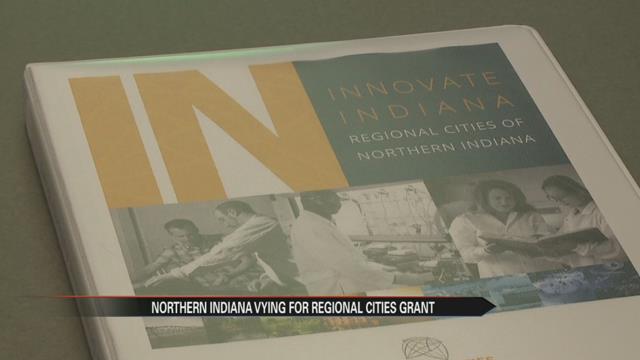 The board of 5 representatives across St. Joseph, Elkhart, and Marshall Counties is working to get a $42 million grant awarded to our region.

It’s all part of Governor Mike Pence’s $84 million Regional Cities Initiative to help boost the economies of two regions across the state.

“A lot of talented people come to study here at the universities then they leave the area maybe moving to the coast, looking for employment,” said Daniel Collins.

Collins works as a manager at Enfocus in South Bend.

It is a small company, started back in 2012, with a goal of providing meaningful employment opportunities to recent college grads.

Collins said for profit, non profit, and municipal organizations all expressed a need for young talent.

So far it’s been a success.

75% of recent graduates who have chosen to work at Enfocus, have stayed in town for at least a year after they’ve graduated from the fellowship.

But retaining talent is an effort that has grown bigger than this small company.

Now a board of five members representing St. Joseph, Elkhart, and Marshall counties has been tasked with drafting a plan to submit to the state.

The hope is to receive a $42 million grant to boost the region’s economy.

“Projects in the plan are brick and mortar projects with the intent to really become a magnet for talent attraction. So the goal of the state and the goal of this regional development authority is to make this region a nationally known brand where people want to move, people want to work, and they want to live,” said Regina Emberton, Michiana Partnership President and Regional Board Member.

The Regional Development Authority is focusing on a number of improvements including: the frequency and reliability of the South Shore Train Line, energizing neighborhoods such as the Renaissance District near Four Winds Field, improving downtown Culver, and building mixed-used housing to attract Millennials, just to name a few.

Eight to 10 regions are applying, but only two grants will be awarded.

“We have the ability to produce a huge return on investment for the state. When you look at the colleges, the universities, the branding of the universities through Notre Dame, our proximity to the world class market of Chicago, the innovative companies that are emerging here—I just can’t imagine another region in the state that would be as poised as we are to make good use of those funds,” Emberton said.

The board must submit its plan by August 31st. A decision is expected by mid December.