Board rules city must turn over evidence in officers case 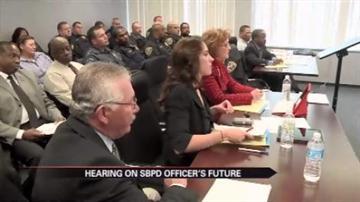 SOUTH BEND, Ind. -- A hearing on the case against South Bend Police Officer Theodore Roberts was held Monday afternoon. While the officer’s attorney didn’t get the Assistant City Attorney kicked off the case, they were successful in getting evidence they needed.

South Bend Police Officer Theodore Roberts is accused of stepping into an investigation involving fellow officers who were accused of harassment.

The defense asked the board to step in.

Roberts’ attorney, Douglas Grimes, described what he and his client feel this case is about.

"What this case is about is an arc of discrimination and bias against this officer,” said Grimes.

To prove that, Grimes needs certain evidence Assistant City Attorney Andrea Beachkovsky has refused to turn over. She said it wasn’t relevant.

"An attorney has the duty and responsibility to object to where evidence sought to be produced may be not relevant,” said Green.

Grimes urged the Board of Public Safety to not take Beachkovsky's word for it but to make their own mind up.

"You can prescreen everything that we ask for, and you make the determination as to whether it's relevant,” said Grimes.

The board mostly sided with Grimes in his motion to have the city turn over evidence he wanted.

Out of the 9 items he asked for, the board denied two and ordered the city to turn over the rest.