Bodies of more than 70 migrants wash up on Libya's coast 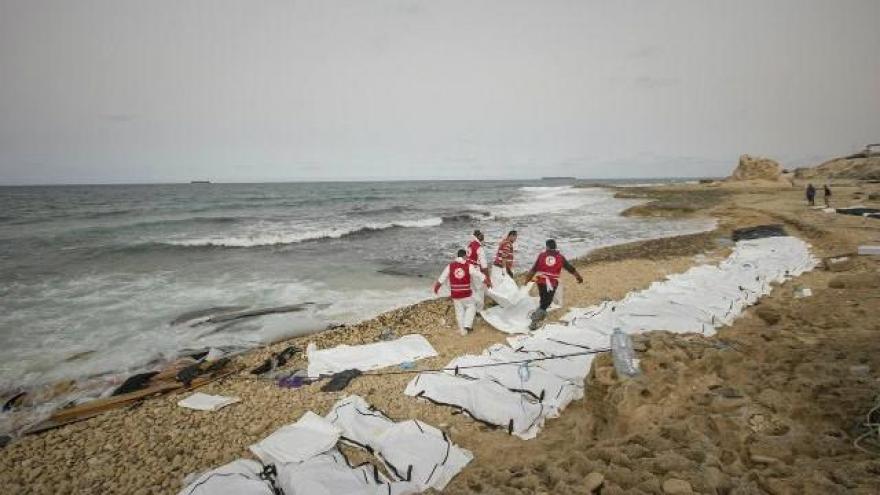 (CNN) -- The bodies of 74 migrants have been recovered by the Libyan Red Crescent after washing up on the country's northern coast near the city of Zawiya.

Circumstances surrounding the incident are unclear but a torn rubber dinghy was reportedly found nearby. Volunteers, who responded to a call yesterday morning, say they believe the individuals drowned while trying to cross the Mediterranean to reach Europe.

"There are still bodies in the sea but our team could not reach them because the sea is very troubling and they don't have boats so they can't reach them easily," Taha K. Sultan Elbarghathi, international relations officer for the Libyan Red Crescent, told CNN.

"74 have been collected and the rest are expected to wash ashore too," Elbarghathi said, adding that this was the biggest number of bodies retrieved by the local Zawiya branch in a single mission.

He said the bodies are all those of African men, of varying ages; their boat is thought to have got into difficulties at the weekend.

Elbarghathi said they are uncertain how many migrants were on the vessel but that there could have been around 150 individuals on board, given the type of dinghy recovered nearby.

He said: "We don't know the exact time the boat capsized but the boat did not totally sink ... One of the sides has lost its air."

Volunteers are continuing to collect bodies as they wash ashore and prepare them for transfer to a local hospital.

"It's another one of the tragic incidents that have happened so far this year and certainly reminds us that the risk faced these days (is) one that often goes unnoticed by most of the world," Stephen Ryan, IFRC spokesperson told CNN.

Ryan said statistics from the International Organization for Migration (IOM) indicate the number of migrants crossing between Libya and Europe is on the rise.

"And in fact, although still early, the numbers of people that have successfully made the journey is higher than it was last year."

In the first weeks of 2017, 272 migrants and refugees have drowned in the Mediterranean, according to the IOM. Last year was the deadliest year on record for migrant deaths at sea, with 5,082 lives lost.