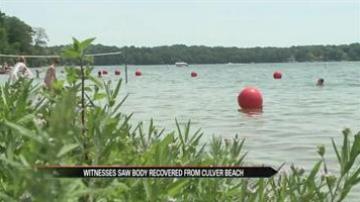 The missing man was found in 5 feet of water just 15 feet outside of the swimming area.

Indiana Conservation Officers said the man could have been missing for 4-5 hours but his family didn't realize he was missing until they saw his shoes by the water.

Witnesses said first responders cleared the beach at Lake Maxinkuckee to remove the body around 9:30 p.m. on the Fourth of July.

Kimberly Baugh said, “When the EMS people started bringing up the body we were over in the grassy area but when they brought him up in the ambulance I could hear a lot of screaming and yelling, like they were really upset.”

Baugh said her two sons were swimming while divers used sonar to look for the missing person, and she was upset that they didn't clear the beach sooner.

“My kids could have been right over the person. I don't know how long the man had been there.That really worried me," said Baugh.

The Marshall County Coroner is performing an autopsy to determine the cause of death.

“It’s very sad, you just don’t think something like this is going to happen and I felt very sorry for the family involved and they are in my thoughts and prayers,” Baugh said.

Indiana Conservation Officer Jonathon Boyd said this is a death investigation, but last summer there was a drowning at this location.

Boyd said, “It’s tough, especially during the holidays when we have to recover the family member of somebody and inform them that they lost someone when they were just out trying to have a good time."