Body found in burning car after crashing in an alley 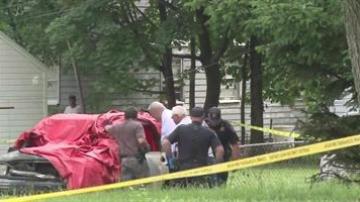 SOUTH BEND, Ind.-- A body was found inside a burning car in an alley behind Elmer and Bulla Street in South Bend on Monday.

Around 1 p.m. on Monday witnesses saw a car reversing down an alley just minutes before it crashed into a fence.

Gary Horvath, a Division Chief with the South Bend Police Department, said they are investigating the crash as a traffic accident.

Horvath said, “It appears that the gas tank was ruptured so it was a high intensity fire.”

Firefighters wore hazmat suits to extricate the body from vehicle.

Horvath said, “As you can see it’s a rescue-rig and as you can see they have to remove parts of the car and cut the vehicle open in order to remove the victim.”

The woman who called 911 said it was a horrific sight and she didn't want to go on camera because she believes this was an act of violence.

“He was lying in the seat and you could see him through the driver side back window. And I mean he was gone, it was horrible.”

The witness said she saw two men running away from the crash just seconds after the fire started.

“I believe he was trying to get away and got shot. I’m not sure exactly how the fire started but I do believe it was not just an accident.”

The witness says she did not hear gunshots but she believes the victim was unconscious before the fire started.

UPDATE: The man whose body was found in the car has been identified as 26-year-old Thomas Arthur of LaPorte.