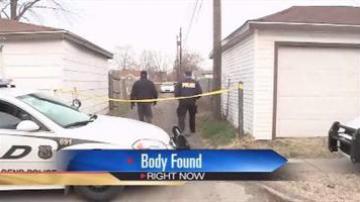 SOUTH BEND, Ind. – The identity of the man whose body was found in an alley in South Bend has been released.

The man has been identified as 42-year-old Andre Byrd.

His body was found in the 400 block of South Walnut Street Thursday morning.

An autopsy was performed and it was determined Byrd was the victim of a homicide. His cause of death was gunshot wound to the head.

Severo Jimenez has lived in the neighborhood most of his life.

Since that time Jimenez said the neighborhood has changed.

He said he heard gunshots overnight.

"Then I heard a couple more and that's when I realized it was a pistol, so I rolled off the couch and hit the ground," said Jimenez.

A bullet hole is visible in the garage next to where Byrd's body was found, investigators have not said if it is connected in this case.

"Officers arrived and found a black male deceased. It appeared to them he could be a victim of a homicide, therefore the homicide unit was called out," said Tim Corbett, Metro Homicide Unit commander.

A press release put out by the St. Joseph County Prosecutor's office states, "results of the autopsy conducted today indicate the manner of death is homicide and a gunshot wound to the head."

County Metro Homicide Investigators are continuing to interview witnesses. If anyone has information about this incident you are asked to call their unit at (574) 235-5009 or Crimestoppers at 288-STOP.