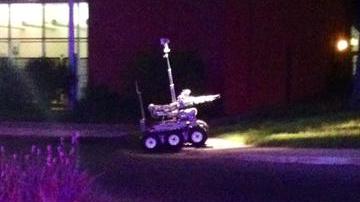 Police say that a woman who came to drop off mail found a box sitting on top of a drop box just outside the post office. That is when she called police.

Officers then called in the bomb squad to retrieve the box. Officers used a robot to locate and investigate the package.

Investigators inspected the box and found that it was empty and not a threat.