Bombing in Afghanistan's capital related to visit from Hagel 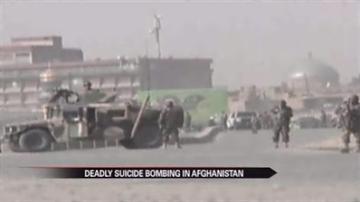 At least nine civilians were killed by the suicide bombing.

It happened outside the Afghan Defense Ministry, which is barely a mile away from where Hagel was in a meeting.

The Taliban is claiming responsibility, saying the attack was to send a message to Hagel.