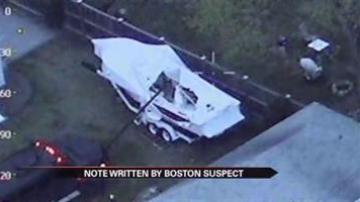 BOSTON — The teenager accused in the Boston Marathon bombing left a note claiming responsibility for the attack.

Dzhokhar Tsarnaev wrote a note on the wall of the boat where he was found.

The message claimed the attack was payback for attacks against Muslims in Iraq and Afghanistan.

According to a source, the 19-year-old wrote he would not miss his older brother, Tamerlan because he would soon be joining him.

Tamerlan died in a shootout with police.