Bombs away: Toilets explode in University of Chicago dorm 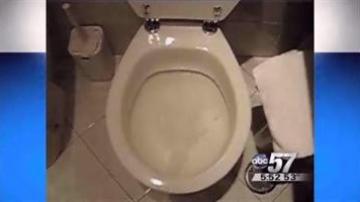 CHICAGO, Ill. -- The University of Chicago has a dirty problem.

The toilets in one of the buildings on campus keep on exploding. Pierce Tower is one of the oldest buildings at the university.

Students say you never know when waste is going to shoot from a bowl in the bathrooms.

“In a 24-hour period, the plumbing exploded twice and exploded with such force and severity," said freshman Michelle Rodriquez. "It was on the floor, there were rivers of excrement and urine and pieces of porcelain.”

Another student said, "I've heard stories of people being splattered with excrement. I think it would be great if they give us some kind of discount or something like that.”

Despite the combustible commode problems some students say they love living in the 50-year-old building.