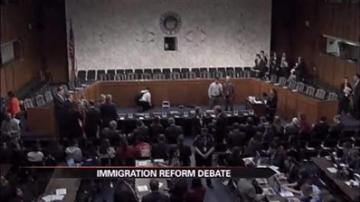 The Boston Marathon bombing suspects are stirring up a debate in the Senate about immigration reform.

Opponents of a new immigration bill are using the bombing suspects to stop legislation from being passed.

During a Senate judiciary hearing on the bi-partisan bill Monday, a supporting Senator says the bill would help national security. He says it should not reflect badly on the majority of immigrants.

"Last week opponents of comprehensive immigration reform began to exploit the Boston Marathon bombing," said Senator Patrick Leahy.  "I urge restraint in that regard. Refugees and asylum seekers have enriched the fabric of this country from our founding."

The bombing suspects were originally from the Russian Republic of Chechnya.

The surviving suspect came to the United States in 2002.

He became a US citizen in the fall.