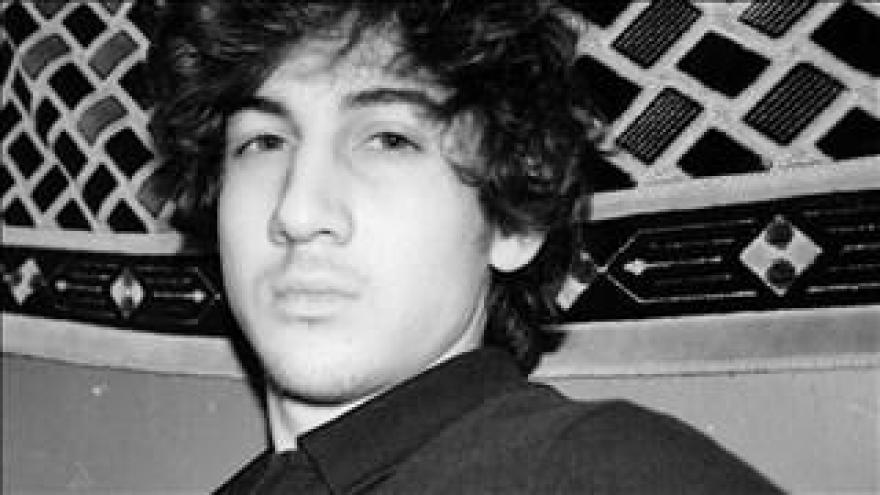 Boston Mayor Martin Walsh, in a statement, thanked the jurors for their service in the trial of Dzhokhar Tsarnaev. "I hope this verdict provides a small amount of closure to the survivors, families, and all impacted by the violent and tragic events surrounding the 2013 Boston Marathon. We will forever remember and honor those who lost their lives and were affected by those senseless acts of violence on our city," he said.

A jury has sentenced Boston Marathon bomber Dzhokhar Tsarnaev to death on some counts.

Jurors have reached a decision in the penalty phase in the trial of Dzhokhar Tsarnaev, who was convicted for his role in the Boston Marathon bombings and the further bloodshed that followed.

The jury deliberated for more than 14 hours over parts of three days before reaching its decision. They were tasked with deciding whether Tsarnaev should be sentenced to life in prison or death.

That decision is expected to be read in a federal court in Boston starting at 3 p.m.

Bill and Denise Richards, parents of the bombing's littlest victim, 8-year-old Martin, took seats in the second row near the jury box.

The sentencing is the final chapter to a brutal, emotionally exhausting trial that brought forth indelible images of an unspeakable crime. Jurors saw the second bomb go off by the Forum restaurant and they viewed videos and photographs of the carnage. They heard the screams and saw people on the street, dying even as bystanders rushed to help. And they heard from people who survived against all odds but continue to struggle with their injuries.

Rescuers spoke of the decisions they had to make in the face of such overwhelming bloodshed: Who could they save, and who should they leave behind?

The bombing of the finish line of the Boston Marathon on April 15, 2013, recalled other acts of terror on U.S. soil like the attacks of September 11, 2001. The homemade bombs, built with pressure cookers loaded with gunpowder, BBs and nails, also injured at least 240 people; 17 of them lost limbs.

Boston was set on edge for days as the suspects remained at large. Finally, on April 18, police released surveillance images of two suspects they called "black hat" and "white hat." It didn't take long for the two to be identified as Tamerlan and Dzhokhar Tsarnaev.

Within just a few hours of the release of the photos, a campus police officer at the Massachusetts Institute of Technology was shot to death as the fleeing brothers tried to take his gun. But they were thwarted by a locked safety holster.

The Tsarnaev brothers hijacked a Mercedes SUV; Tamerlan told the driver he was responsible for the marathon bombing. The driver escaped when the brothers stopped at a convenience store for gas and snacks.

Tamerlan Tsarnaev, a 26-year-old married father and former Golden Gloves boxer, died hours later in a standoff with police in Watertown, a Boston suburb. Out of ammunition, he tossed his empty pistol at an officer and walked into a hail of police bullets. As officers wrestled him to the ground, Dzhokhar Tsarnaev ran at them in the stolen Mercedes SUV, running over his brother and dragging him.

The younger Tsarnaev was finally arrested the next day; he was discovered hiding in a tarp-covered pleasure boat in a Watertown backyard.

Tsarnaev hid in the boat for hours. At some point, he picked up a pencil and wrote what prosecutors called his "boat manifesto." Streaks of blood covered portions of the writing and more than a dozen bullet holes obliterated parts of words.

It said he was "jealous" that his brother had achieved paradise by dying like a holy warrior during the gun battle with police. About the bombings, Tsarnaev wrote that he didn't enjoy killing innocents, but that circumstances called for it:

"The US Government is killing our innocent civilians but most of you already know that," he wrote. "Know you are fighting men who look into the barrel of your gun and see heaven, now how can you compete with that. We are promised victory and we will surely get it."

He wrote that he couldn't stand to see the U.S. government "go unpunished" for killing Muslims.

"We Muslims are one body, you hurt one you hurt us all."

He ended with: "Now I don't like killing innocent people it is forbidden in Islam but due to said [word lost to a bullet hole] it is allowed."

In all, the trial consumed 59 court days. More than 150 witnesses testified over 10 weeks and hundreds of exhibits were shared with the jury.

All 12 of the original jurors stayed on the panel throughout the trial; no one asked to be excused. Only one day was lost due to a juror's illness.

Jury selection began during the first week in January, and 108 inches of snow fell in Boston before it was over. The first witnesses took the stand in early March, and Tsarnaev was found guilty of all counts against him in mid-April. The sentencing stage of the trial began on April 21.

Prosecutors focused their case on the stories of the dead and maimed, and of the brothers' social media activities and Internet exploration of radical jihad, including an al Qaeda online magazine article called "Build a Bomb in the Kitchen of Your Mom." It offered detailed instructions for how to construct pipe and pressure cooker bombs.

The defense sought to humanize Tsarnaev, turning its focus on his Russian immigrant family, and particularly on Tamerlan, the older of the two brothers. Defense attorney Judy Clarke said the crimes never would have been committed if not for Tamerlan.

The defense case featured testimony from former teachers, coaches and friends who found Dzhokhar Tsarnaev to be a laid-back, caring friend, industrious student and hard worker. As a youngster, he was academically gifted, overcoming the language barrier and skipping the fourth grade. His report card was studded with A grades.

Clarke emphasized Dzhokhar's youth and his quiet, "gentle" nature, despite growing up a neglected, "invisible child" in a chaotic family. He became untethered by his father's disabling slide into mental illness and his mother's embrace of religious extremism.

When their parents departed for Russia in 2012, Tamerlan became the dominant adult influence in Dzhokhar's life, she said.

Clarke asked jurors to spare Tsarnaev's life, saying he is not beyond redemption. A vote for life, she said, is a vote for hope.

But she could not tell the jury the answer to the question that always has lingered over this trial: Why did he do it?

"If you expect me to have an answer, a simple clean answer as to how this could happen, I don't have it," she said.

Prosecutors said Tsarnaev sought to make a political statement. The bombing, Assistant U.S. Attorney Steve Mellin said, did exactly what it was meant to: It terrorized Boston and the rest of the country.

The trial highlighted the presence of Big Brother-style surveillance in matters public and private. The Tsarnaevs were visually identified from business surveillance videos of the marathon's finish line crowd. Jihadi material was retrieved from encrypted computer files, and investigators traced the purchase of the pressure cookers, fireworks, ammunition and an afternoon spent practicing at a New Hampshire shooting range.

Prosecutors cited surveillance video of Tsarnaev buying milk at a Whole Foods Market 20 minutes after the bombing and tweets such as "Ain't no love in the heart of the city" and "I'm a stress-free kind of guy" as evidence of his callousness.

Investigators were able to retrieve Dzhokhar's backpack, taken by friends from his dorm room, from a landfill. Inside, they found gunpowder residue and hollowed-out fireworks.

Tsarnaev also obtained a 9mm semiautomatic pistol from a friend; the gun was used to shoot MIT police Officer Sean Collier between the eyes as he sat in his patrol car on the night of April 18. Prosecutors called the shooting "an ambush" and said the brothers were after Collier's service weapon as they attempted to escape.

Another surveillance camera caught two men running from the shooting; a flash can be seen, the brake lights of Collier's squad car flicker on, then off, then on again. A passing bicyclist was later identified; he pointed out Dzhokhar Tsarnaev in court as the young man he saw leaning into the patrol car.

The killing of a police officer was, by itself, enough for prosecutors to seek the death penalty. But it came in the aftermath of the main event -- the bombing of the Boston Marathon.

The videos and photographs of the bloody mayhem that exploded near the finish line shortly before 3 p.m. on April 15, 2013, were difficult to watch and impossible to forget.

'This is messed up'

The stories of the survivors and first responders were dramatic and haunting. Among them:

• Smoke coming out of Krystle Campbell's mouth as she screamed. The 29-year-old restaurant manager clutched her best friend's hand, said her legs hurt and then bled to death in the street. It took all of a minute.

• Lingzi Lu screaming in horror and agony as she covered her eyes with her long, tapered musician's fingers. The 23-year-old grad student vomited repeatedly as she bled to death. A police officer stood vigil by her side, even after being ordered to leave her body behind at the crime scene. The officer said she didn't want Lu to be alone.

• Denise Richard, blinded in one eye by bomb shrapnel, crouching over the shredded, 70-pound body of her 8-year-old boy, Martin, begging him to live: "Please, Martin, please!" Her husband, Bill, faced a difficult choice: Stay, or run to save their daughter? He scooped up 6-year-old Jane, her leg gone, and carried her to safety.

• Sydney Corcoran telling jurors what it felt like to slip toward death:

"I was dying. The blood was leaving my body. I was bleeding out. I remember thinking that this was it, I'm going to die, I'm not going to make it. And I remember feeling like I was just going to sleep. And it just felt so cold, and I almost felt peaceful because I just felt like I was going to sleep and I knew I was fading fast."

• And Jeff Bauman describing his thoughts as he looked down at the place where his legs had been and saw a bloody bone protruding from the torn flesh: "This is messed up." He said he "knew instantly that my legs were gone."

In one of the trial's most dramatic moments, prosecutor Mellin paused during his closing for what turned out to be 20 seconds. He gained the attention of everyone in the courtroom as silence consumed them.

Twenty seconds. It seemed like forever. And then Mellin said: Multiply that pause by 12, and that's how long Tsarnaev stood with his backpack bomb behind a row of children.

He also brought home the continuing ripples of devastation, ticking off the names of the 17 people who lost limbs in the blast:

For them, and for the families of Krystle Campbell, Martin Richard, Lingzi Lu and Sean Collier, this case will never be over.