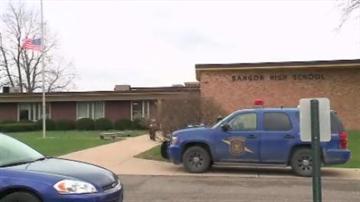 It was a long and emotional morning for parents, students, teachers and police in the small town of Bangor Michigan Friday.

"My Dean of Students ran down to me and said, ‘We've had something go off in a locker.’ Boom it was lockdown, I went right to the PA I said, ‘Call 911,’" said Principal Jeff Melvin of Bangor High School.
Around 9 a.m. Friday, a teacher at Bangor High School heard a small boom--and noticed an unknown liquid seeping from a locker.
A similar explosion was also reported in a bathroom at Bangor Middle School.
Both schools were put in a lockdown and emergency responders were called.
"I didn't hear bomb. I heard an unknown substance, a suspicious liquid, so when we got the call we responded immediately. We were taken to the area and then we kind of indulged what we found and went from there,” said Gary Baker, Chief of Bangor Police Department.
Parents were notified of the developing situation through an automatic phone system.
Because of the events of this week, many parents were nervous enough to take their children home for the day.
"When you hear something that happens like Boston and then your school, a little bitty town. It's like oh my goodness. It can happen anywhere,” said Raceen Buck, parent of a student at Bangor High School.

The 15-year-old student who uses the locker with the bottle bomb was quickly taken into custody.

He allegedly admitted to having something to do with both bombs.

No one was hurt in either incident. Police say the bombs were "work" bombs and are not usually hazardous.