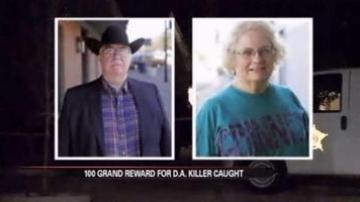 KAUFMAN, Texas — The governor of Texas is putting a bounty on a law enforcement killer.

Governor Rick Perry announced his offering a $100,000 reward to anyone who finds the man police say killed a Texas district attorney and his wife.

Both were killed inside of their home last weekend.

"These are truly direct attacks on the core of our civil society," said Perry.

Police are still trying to figure a motive in the shooting.