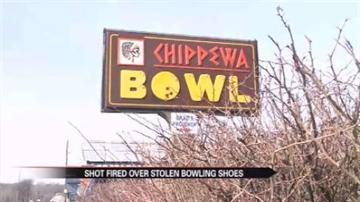 "We've got an employee of the bowling alley that suspects that these two individuals are going to perform a theft of these bowling shoes and leave with these shoes,” said Captain Phil Trent of the South Bend Police Department.

Once the two men were walking in the parking lot still wearing the rented bowling shoes, an employee went outside to check out the license plate of their vehicle or at least get a vehicle description.

That's when police say there was a short confrontation and at least one shot was fired from the vehicle before it left the scene.

"The projectile hits a piece of cement and kicks some debris at him so either a bullet fragment or actually a piece of the building facade hits him in the face,” said Trent.

Police say they don't know if the 29-year-old employee was taken to the hospital or just treated at the scene.

They're still working to narrow down a physical description of the men that drove away from the bowling alley.

They have a vague description of the car.

"Very basically we have a blue sedan, possibly a Ford product,” said Trent.

While rented shoes fueling an argument is a first for officers, police say sometimes it doesn't take much to set someone off.

"It's a matter of people becoming upset with each other the subject matter is sometimes very trivial and makes no sense however violence erupts regardless,” said Trent.

Representatives from the bowling alley said they have no comment other than they are doing their own investigation into what happened.