Box City set up to raise awareness about homelessness 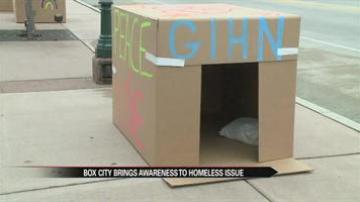 ELKHART, Ind. -- Dozens of people in Elkhart will be sleeping outside in cardboard boxes Friday night to raise awareness about homelessness.

"Those places being full, people are just out of options. Some people are living in their cars, other people are living literally under bridges, and some in tent cities," said Phil Keller, Executive Director of Goshen Interfaith Hospitality Network.

Because shelters are full, Keller says tent cities are popping up all over Elkhart County.

Friday, dozens of people will sleep outside to draw attention to the problem.

"Kind of an invisible population. Most people don't want to see them because if they do and it's right in your face,  you feel like there's something you should do, but instead they just ignore it," said Keller.

The Elkhart County Homeless Coalition hopes that spending the night downtown, sleeping in boxes, will give people an idea of what's it's like to be living out in the cold.

"People can be invisible during warm weather but when it gets really cold outside, you have an increase in the number of people that are incarcerated because they are trying to get off the streets," said Juanetta Hill who works with the Elkhart County Homeless Coalition.

Hill works at Oaklawn Psychiatric Center where they treat the homeless.

She said during this time of year many of the patients try to get arrested or taken to the emergency room just so they can get out of the cold.