Boy in critical condition after being rescued from hole 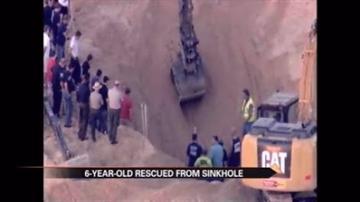 MICHIGAN CITY, Ind. -- A 6-year-old boy remains in critical condition in a Chicago hospital after being rescued from a sinkhole in Michigan City on Friday. The boy's pastor confirms his name is Nathan and he lives in Rock Falls, Ill.

He was with his family on top of Mt. Baldy at the Indiana Dunes National Park when he suddenly fell in. The boy was playing in a roped off area, but it's unclear how he fell in.

His family did not see him sink, but rushed to his aid when they heard screams for help.

As they tried to dig him out, he kept sinking deeper. After calling 911, crews came in with excavation units. Over 50 firefighters and private contractors dug with their hands and equipment for four hours until they found him.

Park officials said he was 11 feet underground and completely submerged.

After an exhaustive effort, emergency crews were finally able to rescue him just after 9 p.m.

From there, they rushed him to St. Francis Hospital in Michigan City. His condition was initially unknown, but firefighters said on his way to the hospital, the boy started to breathe and cry.

Upon his arrival, they flew him via helicopter to Chicago Children's Hospital. He remains there in critical condition.

A spokesperson for the hospital said that when the boy arrived he was able to respond to simple commands.

Mt. Baldy will remain closed until Monday as officials continue to investigate. Crews are currently surveying the area trying to determine how the accident could have happened.