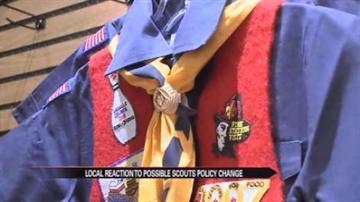 SOUTH BEND, Ind.-- It's a pledge every Boy Scout is proud to make: to honor god, country and the scout law, but it's the last line of that pledge that is now in question.

"The ending line of the Boy Scout promise is 'morally straight,' which some people say to be morally straight you have to heterosexual," said William Menges, Eagle Scout.

Since its creation, the scouts denied gays, saying that same-sex relations are inconsistent with the scouting oath.

But Menges isn't sold and says the scout laws also says members must be 'reverant.'

"We're taught to be reverant to your own belief, you own faith, but also to respect those of other faiths," said Menges. "So are we teaching boys it's okay to respect a person who worships another god but it's not okay to respect someone who falls in love with somebody of the same sex?"

The decision next week will affect thousands of children across Michiana.

"We serve here in the LaSalle Council 8,400 youth through over 2,000 volunteers and we cover a seven and a half county area of greater Michiana," said Patrick D. Bridges, scout executive, Boy Scouts of America LaSalle Council.

Menges earned Eagle Scout, the highest rank awared in the boy scouts. However, he says not everyone is given the same opportunity.

"I've heard news reports that they've been denied their eagle award because their parents are gay or they decided to come out of the closet and now they made this great achievement and they're being denied the honor of receiving their eagle because of one thing or another," said Menges. "It doesn't change who they are, it doesn't change what they do and I don't feel it's right."

Right now, there's no way to guess how many troops would choose to allow gay members. But it all hinges on the national decision.

"The national has not made any decision on this, there will be, as I understand it, an executive board meeting sometime next week," said Bridges.

Many viewers posted to our Facebook wall saying they're opposed to the possible acceptance of gays unti the scouts.

"Maybe there should be gay scouts of America then they can have their own rules," said Beth Wood, viewer.