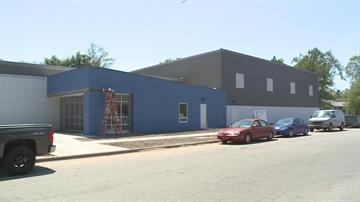 BENTON HARBOR, Mich. - A non-profit is bursting at the seams and about to open two state-of-the-art facilities. Credit belongs to, in part, Harbor Shores Golf Course.

In June the Teen Center will be the first building to open across from Benton Harbor High School. The facility will be a big upgrade for the club.

The location served the club well for 10 years. “It’s a safe haven where kids can be kids, have fun and socialize,” said Schaffer. The location worked so well kids kept showing up. “We’ve almost doubled in daily attendance in the last four years.”

Schaffer knew the club needed to expand its space and fix Bard School to keep programs viable but funding was needed.

In July of 2010 Jack Nicholas hosted a ‘skins’ game to kick to open the course.  The prize was $1 million put up by Whirlpool, in turn, given to the Boys and Girls Club.

Since the summer of 2010 almost $6 million was added to the campaign by several donors.

“In here will be approximately 28 to 34 computers,” said Liji Hanny, Director of Operations for the Club, pointing to a room under construction at the Teen Center.

The Teen Center is an 18,000 square foot building with everything from a gym to a coffee shop that’ll mimic a college campus. “Creating a college-going environment where college is always in the conversation,” said Hanny.

With the additions of the Teen Center and second facility near the Benton Harbor Housing Commission, the goal is to double in attendance again by 2015.