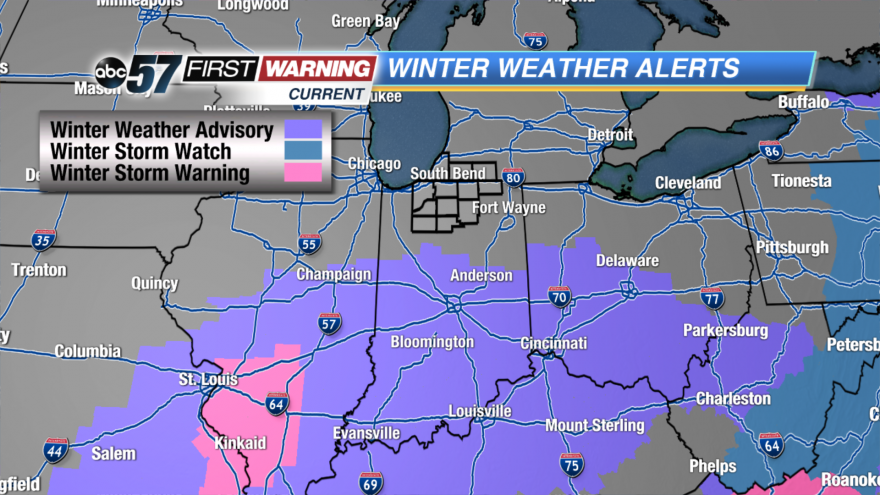 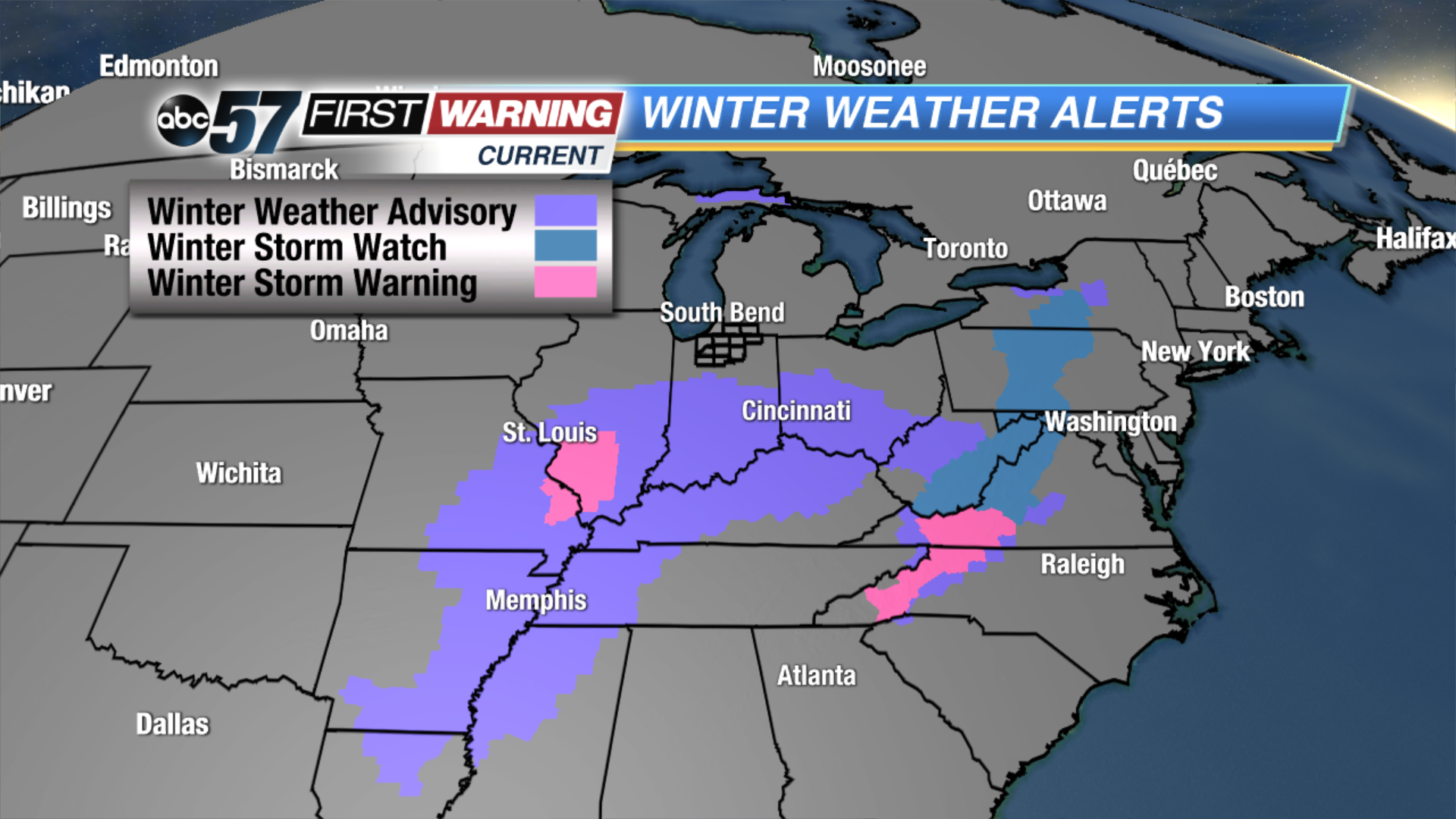 An expansive winter storm is taking shape as of Wednesday morning. It has prompted winter weather alerts from Louisiana to Indiana to North Carolina to New York! This is an anticipation of snow, sleet, ice, or a combination of the three. Michiana is not currently under any sort of alert, but that could change as Winter Weather Advisories are in effect for all of Indiana south of the Kokomo area. 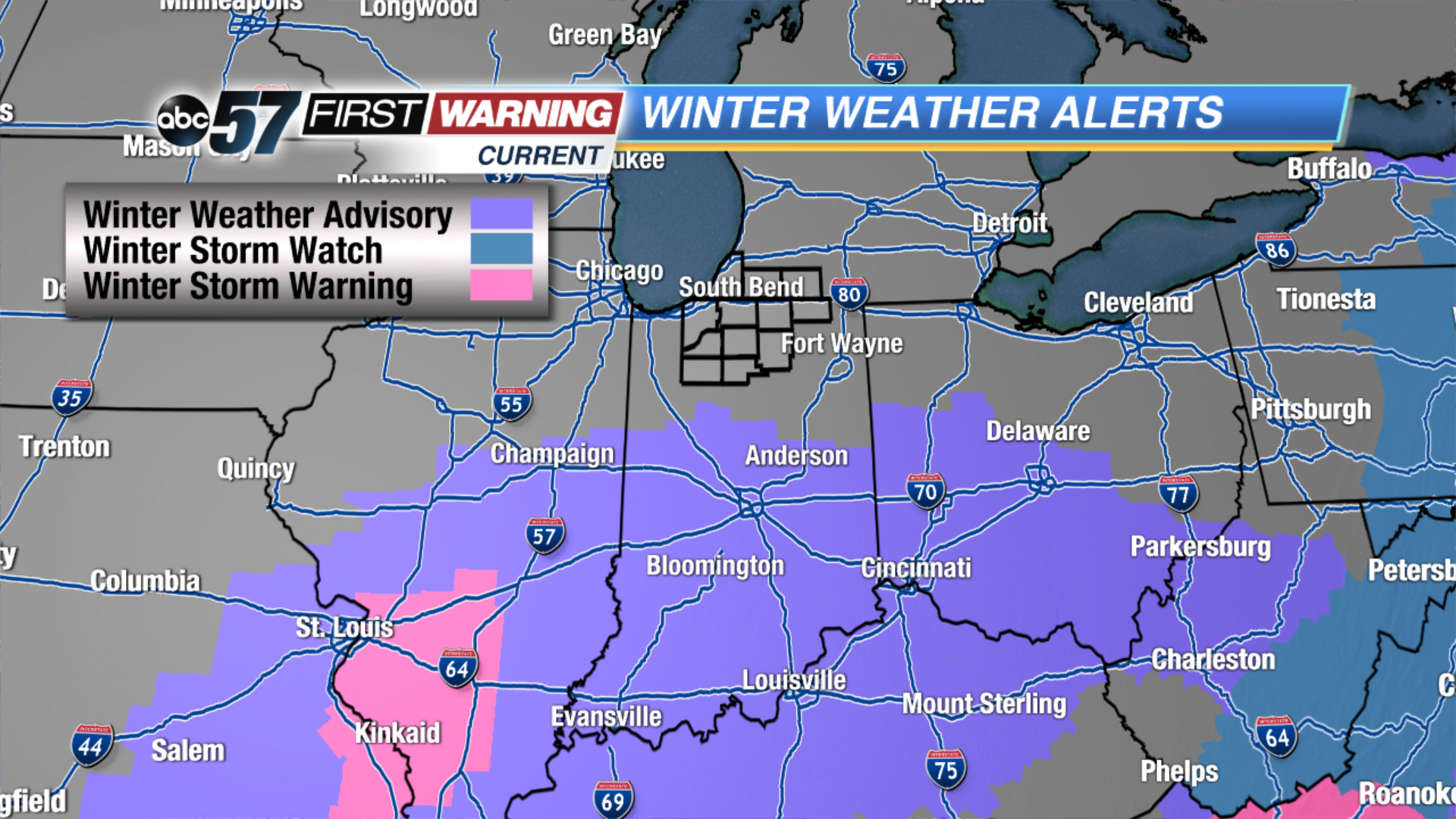 If you plan on traveling southward on Thursday, be sure to plan for slick conditions. This includes U.S. 31, I-70, I-74 and I-65. Upwards of 1-3" of snow and ice is expected in the Indianapolis area with even more possible near Evansville. The big "winner" in terms of snow with this system will be southern Illinois and eastern Missouri where 3-6" could fall by Thursday evening. Nothing like that is expected in Michiana, but we won't dodge the system completely. 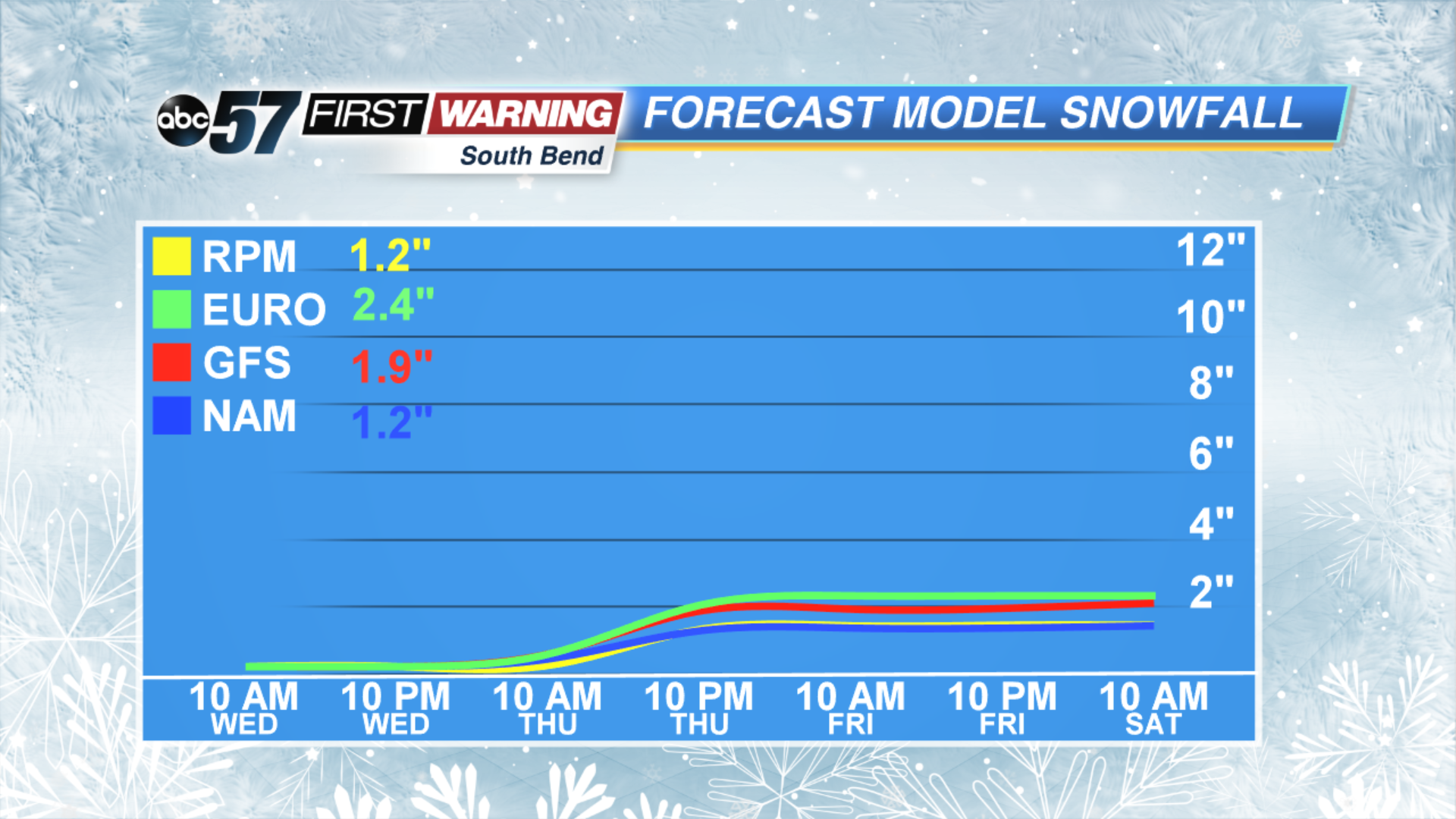 Most forecast models deliver 1-2" of snowfall by 11 p.m. Thursday evening for the South Bend region. The best chance of seeing 2" will likely be south of  U.S. 30, but exact placement of the heaviest snow is still up in the air. As of Wednesday morning, an area-wide 1-2" appears likely. With temperatures expected to be just above freezing during the daytime hours of Thursday, not all of what falls will stick. Despite this, some slick and slippery conditions could certainly develop. 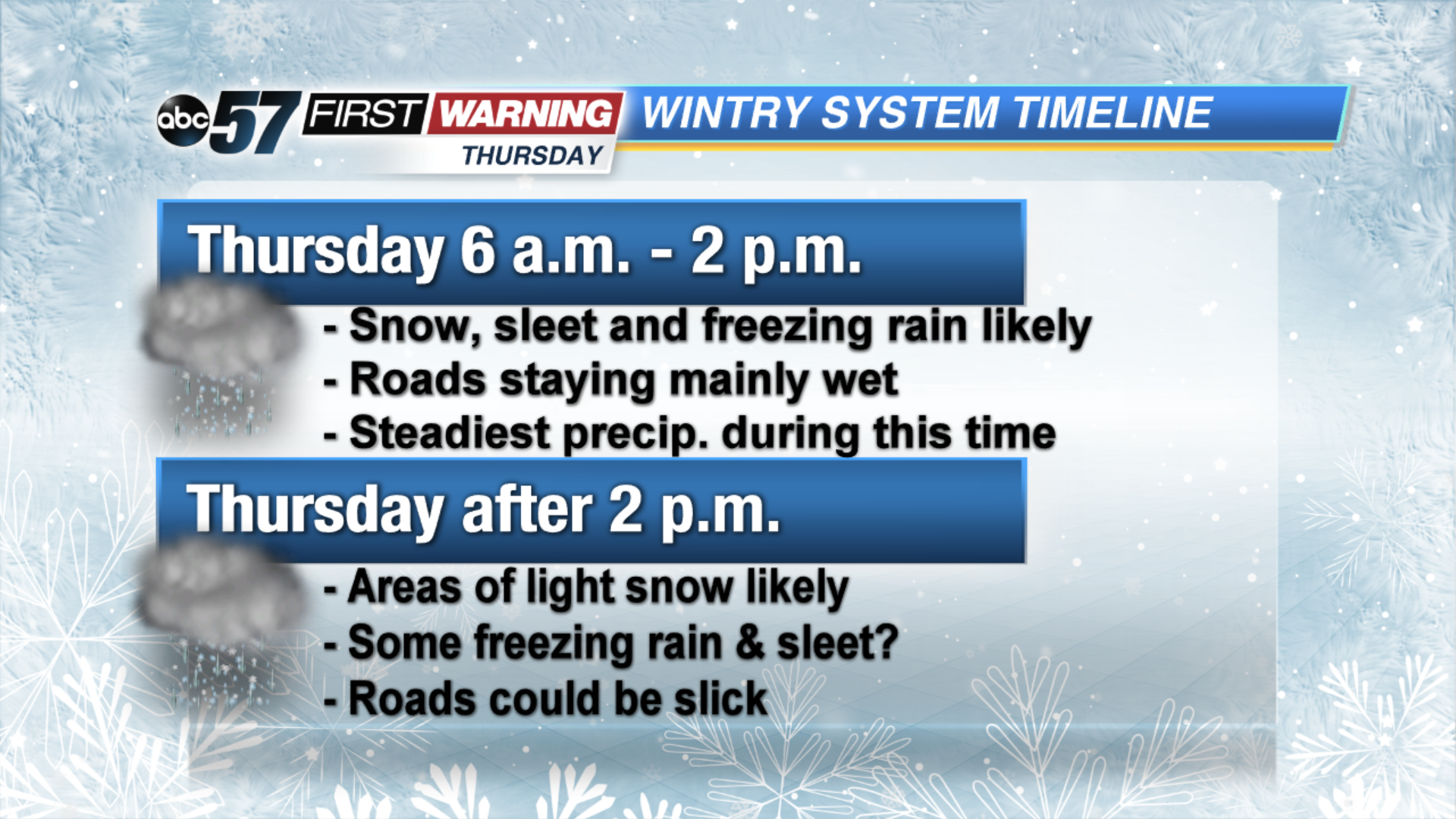 Not only is Michiana dodging the heaviest accumulation with this storm, but the duration won't be very long. Precipitation will move in early in the morning on Thursday and come to an end in spots through the afternoon. Some scattered wintry precipitation and snow could last into the evening, but the steadiest will fall during the 6 a.m. to 2 p.m. window. The same cannot be said for other states, though. 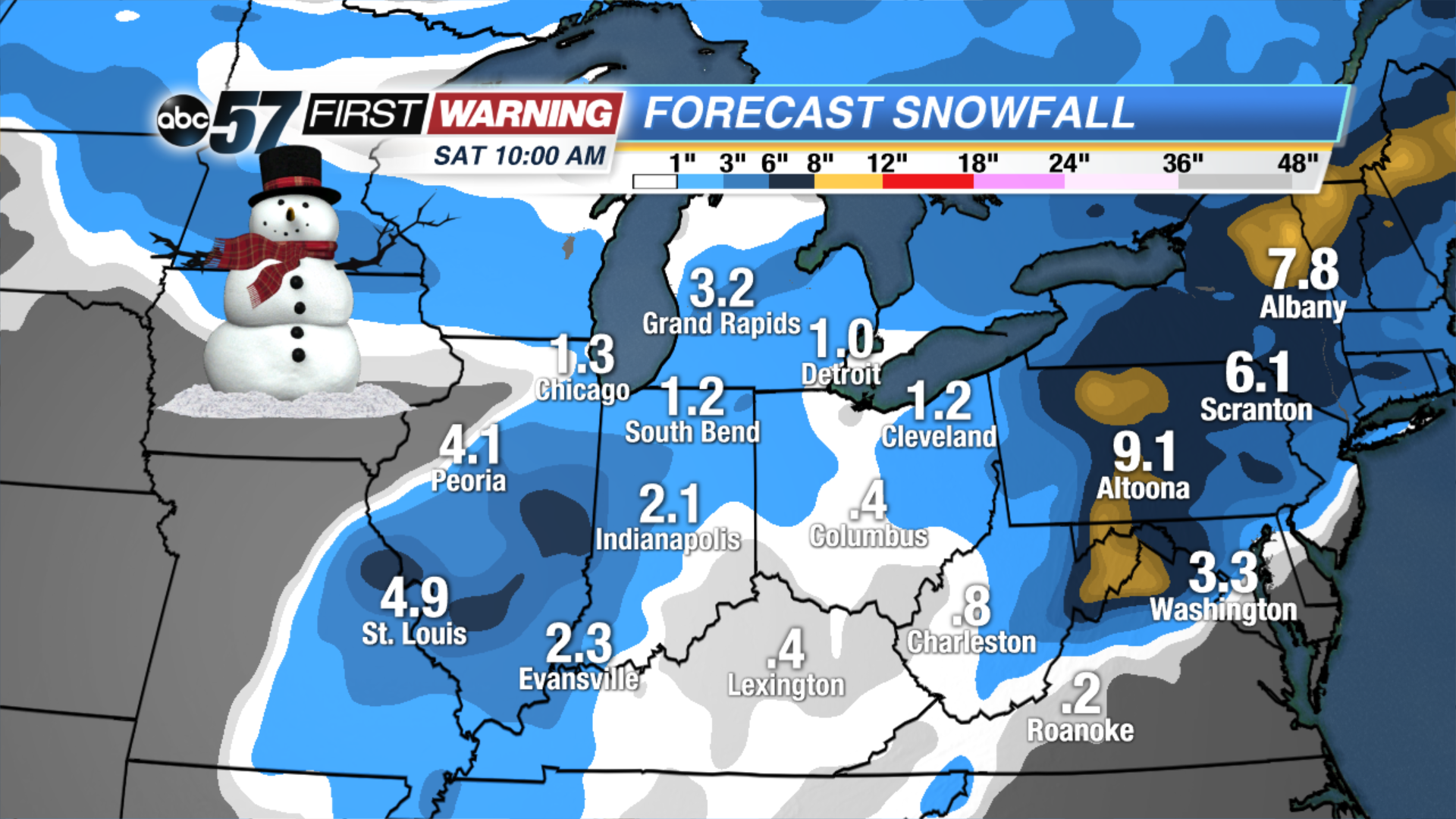 Not only are parts of Missouri, Illinois and Indiana expecting 3-6" of snow, but parts of Virginia, West Virginia, Maryland, Pennsylvania, New York, Vermont, New Hampshire, and Maine are as well. Some totals of 6-10" are possible in those states! With this particular winter storm, though, snow won't be the biggest issue. That title will belong to freezing rain and sleet. 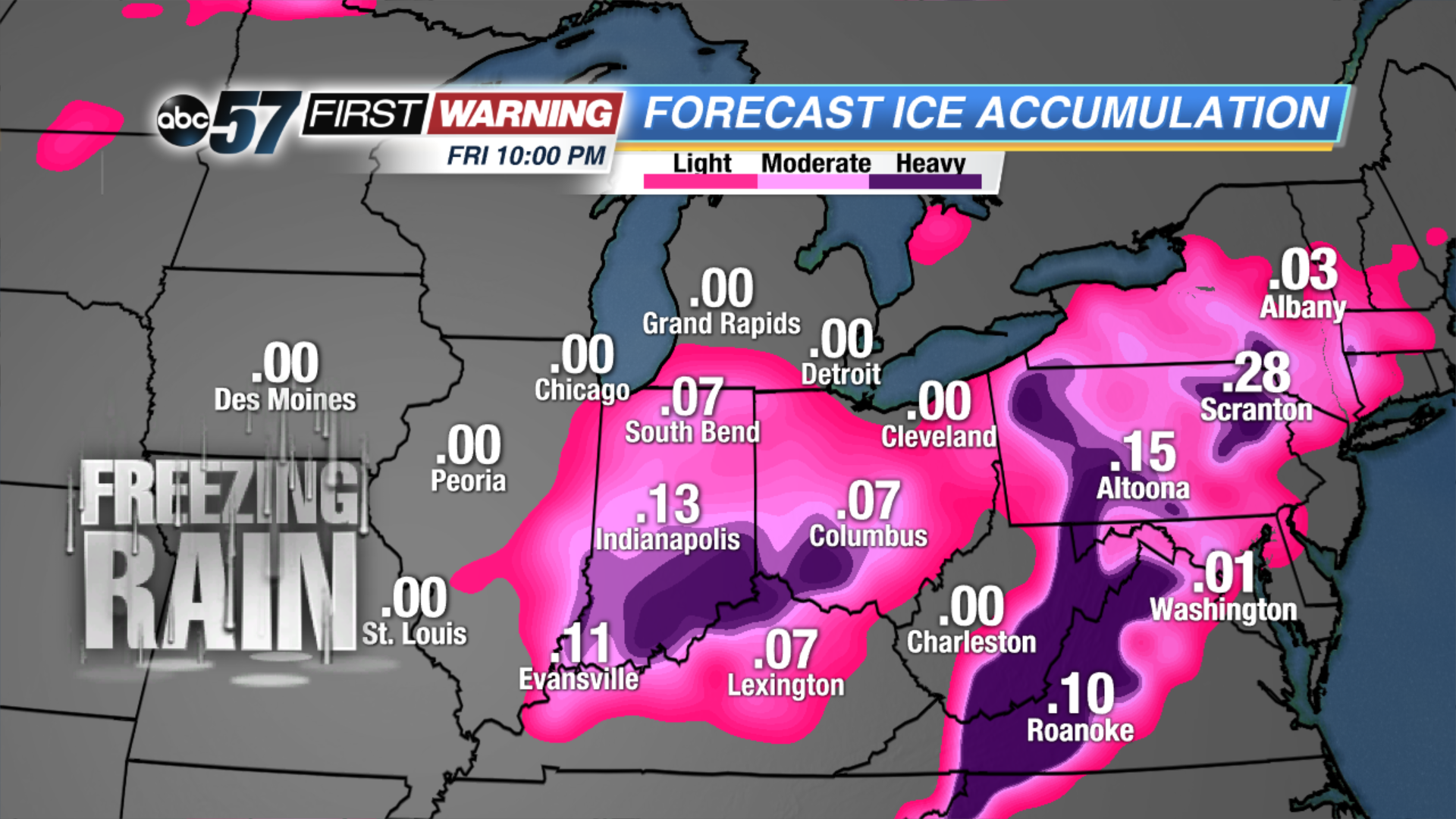 An expansive area of at least a glaze of ice is expected Wednesday night and Thursday from southern Illinois and Indiana to the mountains of North Carolina, Virginia and Pennsylvania. And that's all it takes to cause problems is a glaze. Ice accretion upwards of a quarter to half-inch is possible from western North Carolina northward to Pennsylvania. That is enough to make some roads extremely dangerous, bring down tree limbs and power lines, and cause some power outages. In Michiana, any freezing rain that falls would be minimal at best. Just be sure to allow extra time and drive cautiously throughout the day Thursday in case road conditions do become poor!
Share this article: