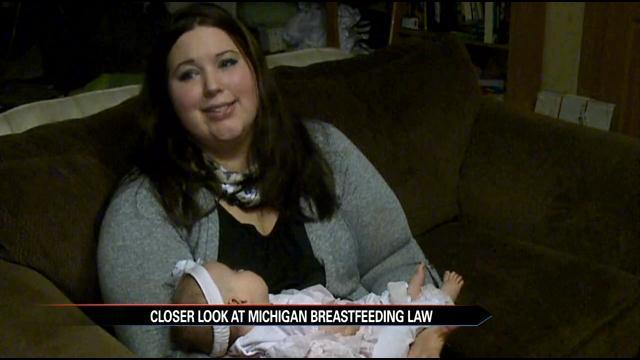 It was enacted this past June.

It gives women the right to nurse a child in any place that is open to the general public, including stores, restaurants and city-run buses.

Sara Glide is the mother of a three-month-old baby girl. She says her daughter has breathing problems that can cause issues if Glide ever covers her daughter's face with a nursing blanket.

Wednesday night around dinner time, Glide said she was breastfeeding in Matt and Mikes, a restaurant in Three Rivers, when the waitress refused to serve her unless she covered up while she was feeding her baby.

When Glide didn't cover up, the waitress had another employee serve the family.

The owner of Matt and Mikes, Rick Butler, said the waitress was not discriminating against Glide and they have no problem with breastfeeding.

But when it comes to this new law, Butler says he isn't sure about the dos and don'ts. Something he wishes the government in Michigan would clarify.
Share this article: