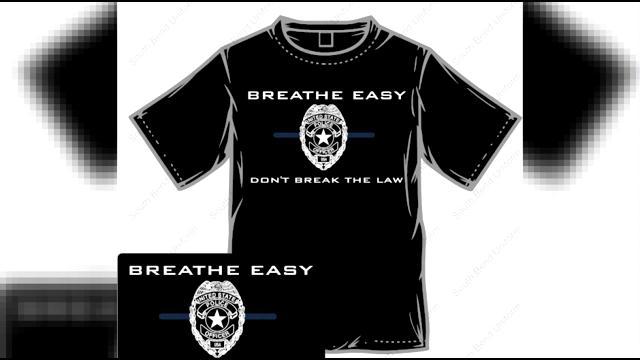 A local police officer is taking a bold stand for his fellow boys in blue. South Bend Uniform Company created shirts that read, "Breathe Easy, Don't Break the Law." They've been causing quite a stir on social media.

Officer Jason Barthel, a Mishawaka Police Officer, says he's trying to spread a message for our entire country to breathe easy and come together.

"I feel like it's important to get our message out there," says Barthel.

He believes there has been too much negative attention brought to the police forces across the country.

When Notre Dame's women's basketball team warmed up in shirts saying "I can't breathe," it set him off.

"I do believe it was a slap in the face to law enforcement in the area," says Barthel.

A slap in the face that forced him to share these strong feelings about what happened in New York.

"You will be able to breathe if you don't break the law and you don't have negative reaction," said Barthel.

Those are feelings not everyone agrees with.

Shawn Major-Winston was at the Notre Dame game that night. He believes it was a bold move but a necessary one, too.

"I felt like it was just as remarkable as when in the 1968 Olympics and the 200-meter runners threw up their fists for black unity," says Major-Winston.

The opinion of Officer Barthel does not reflect that of the entire Mishawaka police force.