Breathing in Delhi air equivalent to smoking 44 cigarettes a day 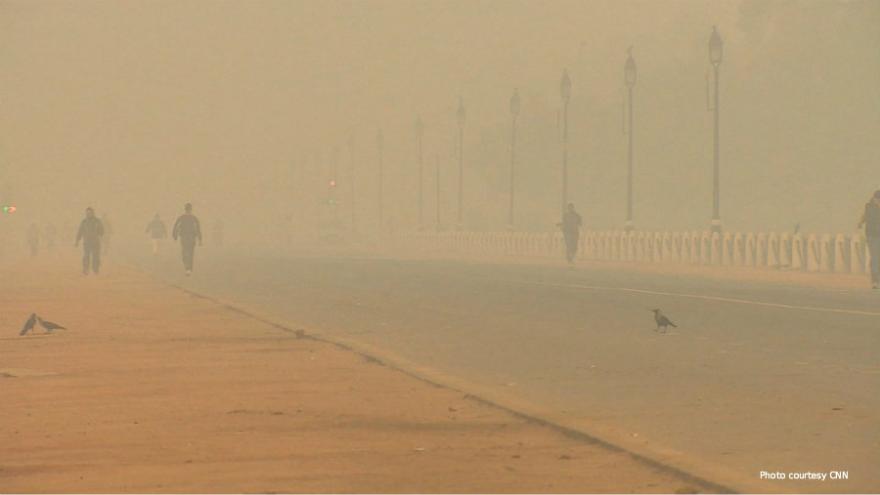 (CNN) -- It was early on Tuesday morning when residents in the Indian capital of Delhi first began to notice the thick white haze that had descended across the city.

Initially viewed as a mild irritant, by mid-week its debilitating effects were evident to all, as the city struggled to adapt to the new eerie, martian-like conditions brought about by the pollution.

With visibility severely reduced, trains have been canceled, planes delayed and cars have piled into each other, with multiple traffic accidents reported across the city.

The sense that this is now a city under siege has been enhanced by the unusually far-reaching actions of the Delhi government.

On Tuesday afternoon, city chiefs closed all public and private schools, requesting instead that the city's tens of thousands of school-aged children remain indoors; on Wednesday, they banned incoming trucks and halted civil construction projects; while on Thursday, they announced new plans to begin implementing a partial ban on private car use as of next week.

But as the city woke up Friday to a fourth straight day of heavy pollution, practical considerations were being overtaken by more serious concerns, with journalists and doctors warning residents of the long-term health implications.

Air quality readings in the Indian capital have reached frightening levels in recent days, at one point topping the 1,000 mark on the US embassy air quality index. The World Health Organization considers anything above 25 to be unsafe.

That measure is based on the concentration of fine particulate matter, or PM2.5, per cubic meter. The microscopic particles, which are smaller than 2.5 micrometers in diameter, are considered particularly harmful because they are small enough to lodge deep into the lungs and pass into other organs, causing serious health risks.

Across the capital, doctors reported a surge in patients complaining of chest pain, breathlessness and burning eyes.

"The number of patients have increased obviously," said Deepak Rosha, a pulmonologist at Apollo Hospital, one of the largest private hospitals in Delhi. "I don't think it's ever been so bad in Delhi. I'm very angry that we've had to come to this."

Breathing in air with a PM2.5 content of between 950 to 1,000 is considered roughly equivalent to smoking 44 cigarettes a day, according to the independent Berkeley Earth science research group.

According to experts, Delhi pollution is made up of a combination of vehicle exhaust, smoke from garbage fires and crop burning, and road dust.

Unsurprisingly, stores selling masks and air purifiers have reported a jump in sales, as many of the city's wealthier residents look to mitigate the smog's more harmful effects.

But outside on the city's streets, the majority of people -- unable to afford expensive preventive measures -- are forced to endure the conditions as best they can.

"My eyes are tearing up from the smoke and I feel suffocated," said college student Swati Kashyap, while waiting for her bus amid congested traffic.

Yogesh Kumar, a cab driver, spends his day in a car. As he speaks, he regularly pauses to cough. "My doctor told me twice to wear a pollution mask, but I didn't," he said.

Those who do cover their face are usually not wearing N95 grade masks, the standard for filtering out PM 2.5 particles. Most of the masks are makeshift — a kerchief tied over the mouth underneath a motorcycle helmet or a scarf tied over the head.

Fatima, who uses only one name, said she started to wear a scarf to cover her face earlier this month. A patterned scarf covers her entire face, showing only her eyes and black cat-eye glasses.

"The upper part is because of religion," she said, laughing. "And the lower part is for the pollution."