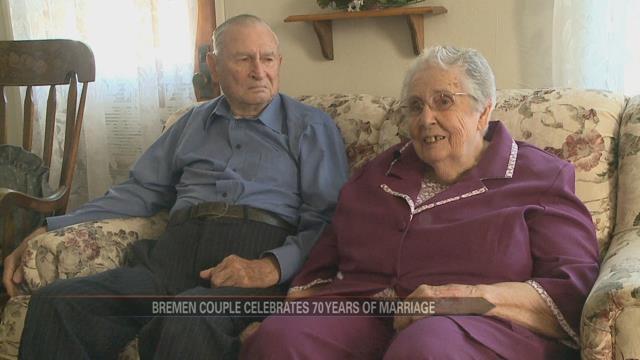 Eloise and Eldon Heyde have been married for 70 years. They say their teenage years feel like yesterday.

“You get married one time and one time only and we stuck to it,” Eloise Heyde, of Bremen said.

She knows what she’s talking about.

Eloise has been married to Eldon Heyde for 70 years.

Saturday, they’ll celebrate their anniversary with their large family.

At 89 and 88, Eldon and Eloise say they still feel like the teenagers they were when they met.

“At first when he proposed I just thought he was being funny. But then we kept dating and dating,” Eloise said.

They were dating for a year before she changed her mind.

“I had no intention of marrying a farm boy. But something happened,” Eloise said.

The Nappanee girl and Bremen boy wed in her parents’ home in 1945.

“I knew we weren’t going to break up,” Eloise said.

Then they moved to their Bremen home where they still live today.

They farmed alongside each other for years.

They had five children who eventually gave them nine grandchildren.

Their family is going all out for the seventieth wedding anniversary on Saturday.

“They are absolutely our foundation,” Virginia Tener, their granddaughter said.

This anniversary milestone is a day they never thought they’d see.

“A few years ago I thought we we’re going to lose them, and I honestly didn’t think we were going to get to do this,” Tener said.

Two years ago, Eldon was hospitalized for his diabetes, and Eloise for a cracked bone in her back.

They were in a nursing home for three weeks before healing enough to return to the home they love so much.

Now, back on their feet at almost 90, this couple drives together, mows the lawn, and with a little pushing, will share the surprisingly simple secret to a long and happy marriage.

“You make my heart pound. That’s why I love you,” Eldon said to Eloise.

“Well, I guess that’s what you do to me too,” Eloise responded.