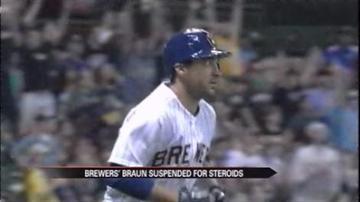 Braun is out for 65 games - the rest of the season. In a statement he says he is willing to accept the consequences of his mistake, a big change from someone who previously denied using steroids.

"I would bet my life that this substance never entered my body at any point. The truth has not changed" said Milwaukee Brewers outfielder, Ryan Braun.

Braun was nearly suspended last year but it was eventually ruled his positive drug test was improperly handled.

All eyes are on Yankee's slugger Alex Rodriguez.

ESPN says its sources claim the evidence against him is stronger than what league officials have on Braun.