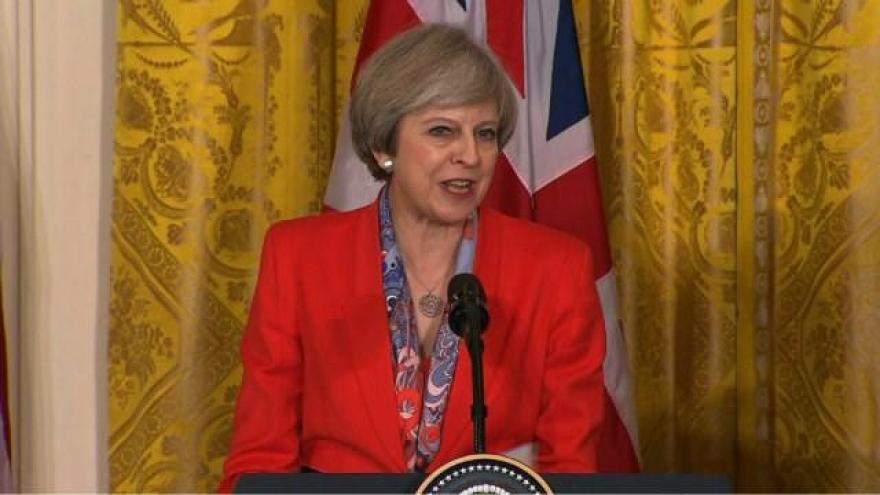 LONDON (CNN) -- British Prime Minister Theresa May has confirmed that her government's detailed plan for leaving the European Union will be published on Thursday.

The so called "white paper" will for the first time formally lay out the government's plan to withdraw from the bloc, including on the question of the status of EU nationals living in Britain.

May made the commitment during Prime Minister's Questions in the House of Commons on Wednesday.

Lawmakers were due to vote later Wednesday on a separate bill to trigger negotiations on the UK's withdrawal from the European Union, following two days of debate.

They are expected to approve the EU (Notification on Withdrawal) Bill, sending it on to the next stage in the parliamentary process.

The real battle is expected next week, according to Britain's Press Association news agency, when the bill returns to the House of Commons for detailed scrutiny in the committee stage. Opposition parties will then try to push through a series of amendments.

May wants to trigger Article 50 of the EU Treaty -- and so start two years of negotiations to leave the 27-nation economic and political grouping -- by the end of March.

Her government was forced to bring legislation to Parliament after the Supreme Court ruled it could not trigger Article 50 without the permission of lawmakers.

As a second day of debate on the bill got under way Wednesday, former Labour Party leader Ed Miliband said he would support the measure but outlined major concerns over Brexit's impact on Britain's future global relationships -- particularly with the United States.

Despite Brexit, Britain must continue to cooperate with its European allies on key issues such as defense, foreign policy and climate change, he said, and stand with them to defend common values such as human rights and the rule of law.

Former Chancellor of the Exchequer George Osborne, who was a vocal supporter of Britain remaining in the European Union, said he would nonetheless vote in favor of the bill to respect the democratic will of the people.

He warned that the Brexit negotiations were likely to be "rather bitter," and that the EU would seek large sums of money from Britain for projects undertaken while it was still a member.

"The negotiation will be a tradeoff, as all divorces are, between access and money," Osborne said.

He warned that if the government pursues a "hard Tory Brexit, or full English Brexit as we are calling it in Scotland," and fails to take account of Scottish interests, then May could face the prospect of another Scottish independence referendum.

"If she is determined to throw down that gauntlet, then she can be absolutely sure that Nicola Sturgeon as First Minister (of Scotland) will pick it up," he said.

'Do we trust the people?'

Opening the debate on bill Tuesday, David Davis, Secretary of State for Exiting the EU, told parliamentarians they could not block the process.

The decision to leave the trade bloc is "a point of return already passed," he said. "At the core of this Bill lies a very simple question -- do we trust the people or not?"

May echoed his words during Prime Minister's Questions on Wednesday.

"This House has a very simple decision to take," she said. "We gave the right of judgment on this issue to the British people. They made their choice, they want to leave the EU. The question every member must ask themselves as they go through the lobbies tonight is, 'do they trust the people?'"

Opposition leader Jeremy Corbyn has ordered Labour MPs not to attempt to delay the process by voting against the government on Article 50.

However, at least 22 of his MPs are expected to defy him and support "a wrecking amendment" filed by the Scottish National Party. The amendment would block the bill's progress on the grounds that the Government has failed to provide for consultation with devolved administrations and has not assured MPs of a meaningful vote at the end of the negotiation process, PA reported. It is highly unlikely to pass when the bill is put to a vote Wednesday evening.

"We can at least stand up to be counted," Welsh Labour MP Owen Smith told CNN on Tuesday.

Many Conservative lawmakers are also against Brexit but are unlikely to support the amendment, saving their ammunition for when Brexit negotiations begin, Smith said.

The House of Lords, the UK's upper house, will also need to approve the Article 50 legislation before it can become law.

Britain voted in a referendum last June by a margin of 52 percent to 48 percent to leave the EU.

However, in both the main parliamentary parties -- the Conservatives and Labour -- opinion is split over the wisdom of Brexit, with only the small Liberal Democrat party and the Scottish National Party united in their stance to stay in.

Not only will the UK need to negotiate the exit from Europe, but also new trade deals with all its trading partners.