Brey on ACC: "There could be 10 teams that make it this year." 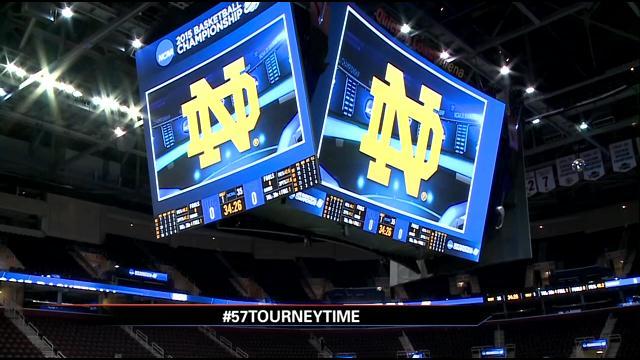 Coming off back-to-back elite eight appearances, the Notre Dame men's basketball team wants more. Head Coach Mike Brey says he doesn't need to say much with his team because they know what the goal is this season.

"This group of guys talks about playing past the elite eight, I mean that's awesome when your culture kind of generates that kind of leadership and tone without me getting involved," Brey said.

Brey says the expectations is higher with this team given the recent success of the program. One factor helping the Irish year in and year out is their tough ACC Conference schedule.

"There's a number of games in your 18 game schedule that can be resume wins and you don't have to get all of them," Brey said.

Brey says the teams in the ACC remind him of the old Big East, which Notre Dame played in before joining the ACC three years ago. He referred to one year the Big East got 11 teams into the NCAA Tournament, and says the Irish's tough schedule presents a challenge but also an opportunity.

"When you have those on the docket, you go, 'oh my god we got to play them.' But you get enough of them and you go boom you're in the thing," Brey said.

"The ACC being as great, as really good this year, you know every game's going to be tough and that's how it is. Just because the opponent doesn't look as good on paper. They tie their shoes just like I tie my shoes," Bonzie Coles said.

"Playing in the ACC, playing in some great arenas, playing at home in front of our crowd with some big games, you know it's something you dream about," V.J. Beachem said.

The Irish don't get many breaks in the non-conference portion of their schedule either. Notre Dame will play defending national champion Villanova, along with tournament teams Iowa, Purdue, Colorado, and Texas.