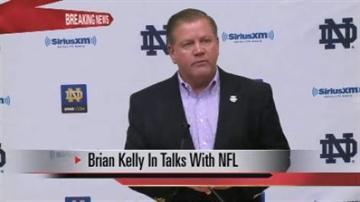 According to sources close to ESPN Brian Kelly met with the Philadelphia Eagles, an NFL team, on Tuesday about their head coach vacancy.

With this news coming just two days after Notre Dame's loss to Alabama, many fans are left wondering if Kelly really cares about his team.

Everyone is surprised about this news, even the University of Notre Dame. We asked University Spokesperson John Heisler for comment on the issue and he said "I don't know anything about it."

Ironically, Head Coach Brian Kelly was asked to confirm whether he had contact with an NFL team during Media Day in Miami. That was just two days before the championship game.

"Any of those things that occur, there is a strict protocol for that. They have to contact my representation and then they have to fall. If that did occur then all of that is secondary to this game.  This is the biggest game I've ever been involved in. My focus is 100% on this football game all that stuff that happens when you're winning football games and I've been through that a lot in my carrier it’s flattering. If there is interest, and I don't know that it is, but then again, that's a secondary topic for me right now," said Kelly.

Brian Kelly's contract with Notre Dame is not public record but the university is considered a non-profit, so it must report his salary. In the most recent tax filings, which are from 2011, Kelly made more than $2.3 million a year.

Folks have been taking to ABC 57's Facebook page talking about this big news. Here's some of their comments:

Steve Mullen says "After the Bob Davie, George O'Lerry, Tyrone Willingham, & Charlie Weis, nightmares. N-d needs to do whatever to keep him."

Chanel Beeman Lahey says "Geesh, why is everyone hating on him, I say if he's offered it, go for it!! Why wouldn't he want to do better & bigger in his career???? Good for him, if this is true!"