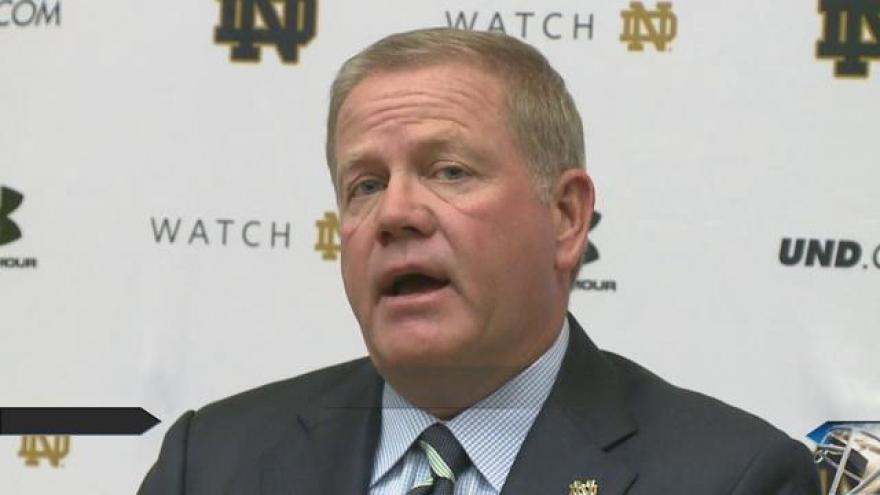 Notre Dame Head Coach Brian Kelly was quick to say Tuesday that he will have his own stamp on the Irish defense when they travel to New Jersey to play Syracuse.

Kelly wanted change for his defense, which began Sunday when he fired Brian VanGorder as defensive coordinator. Greg Hudson, who was hired before the season as a defensive analyst, takes over for VanGorder, but his duties will be simple.

"We'll write the music and he'll be the lead singer" Kelly said. "I want him to bring the energy, the enthusiasm, the passion, the morale, I need those things from Greg, that's what I need. I want our kids to be excited when they walk onto that field against Syracuse."

Kelly said he will be more hands on this at practice, referencing how they will prepare scheme wise and personnel. He added a lot of Notre Dame's struggles this year has been with youth and fatigue.

"It's overused. We got some guys out there that are dog tired trying to do things and they got too many reps, and we got too many players sitting behind them watching" Kelly said.

"I'm not saying everybody's gotta play and we have to go have a big group hug at the end of practice" Kelly said. "I mean it's merit based too but there's just too many good football players that haven't been playing in my estimation and I'm making the calls on both sides and they got to get in the game."

Getting more players in this week will be a challenge because of Syracuse's high tempo offense but Kelly knows he has to try something to get some life into his defense. Notre Dame and Syracuse kickoff Saturday at noon, the game will be televised on ESPN.