Brian Kelly says closeness of recruiting class is its strength 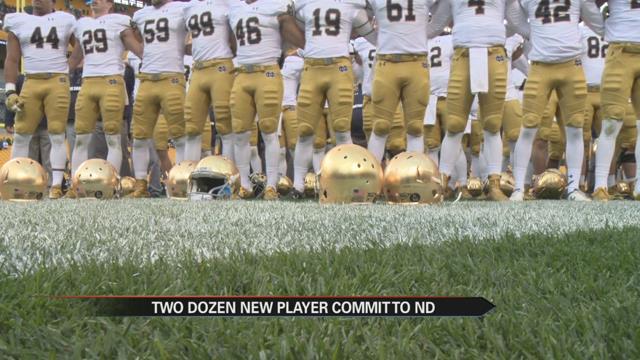 It's another recruiting period in the books for the Fighting Irish, signing 24 players with no decommitments.

How it shakes out as a whole depends on how you look at it. If you base it on class rankings, the Irish didn't look so hot. Missing out on big names and dropping throughout the day.

According to ESPN, the Irish finished with the 16th best group of new players. Around noon yesterday, they were 13th.

However, 2015 Irish opponents faired better. Ohio State had the number 5 class, Clemson the 8th, Texas the 10th and Stanford the 13th.

As you remember the Irish lost to three of those teams. They often recruit the same guys. That could have played a factor.

But Notre Dame head coach Brian Kelly says that while this class may not look like the strongest on paper, it addresses the team's needs, especially on defense. And establishes both the present and future.

"It's not an immediate fix," said head coach Brian Kelly. "It's not just for the future. I think it covers all the areas you would expect it to cover and that's why it doesn't have that flashiness. But I will say this. This is a close group of guys. They know each other. They've stayed in contact with each other and the great thing about that is that that will be a strong pull in the locker room."

It's still a solid class, with three members of the Max Preps all American team and five who played in the US Army all American bowl.

Linebacker Daelin Hayes is perhaps their biggest pickup. Their closeness as a unit will be tested in the coming years.