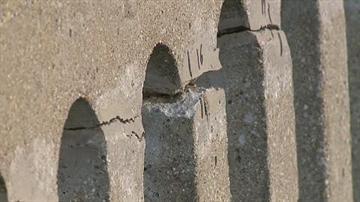 SOUTH BEND, Ind. – A section of the Michigan Street Bridge over the Saint Joseph River has been closed due to a potentially dangerous hazard.

Tuesday night a man walking on the sidewalk on the east side of the bridge noticed the cracks in the railing had grown.

The man told police he was an engineer and that he saw pieces of the bridge falling into the river. Police called the city street department and they shut the sidewalk down.

A few hours later an INDOT worker arrived and examined the damage. According to them, closing the sidewalk was the correct thing to do.

The bridge was constructed in 1914, and had support structures added in recent years. Other maintenance has been done on the railing itself. Cracks have since broken through the patchwork.

At the end of June the bridge was shut down overnight, and several lanes remained closed for weeks before they were reopened and a weight limit of 10 tons was put into place.

According to INDOT workers, the damage on the rail is not tied to the cracking on the deck of the bridge and poses no threat to vehicles driving over the bridge.

As of Monday morning the sidewalk remains closed with no word on when repairs will be made.