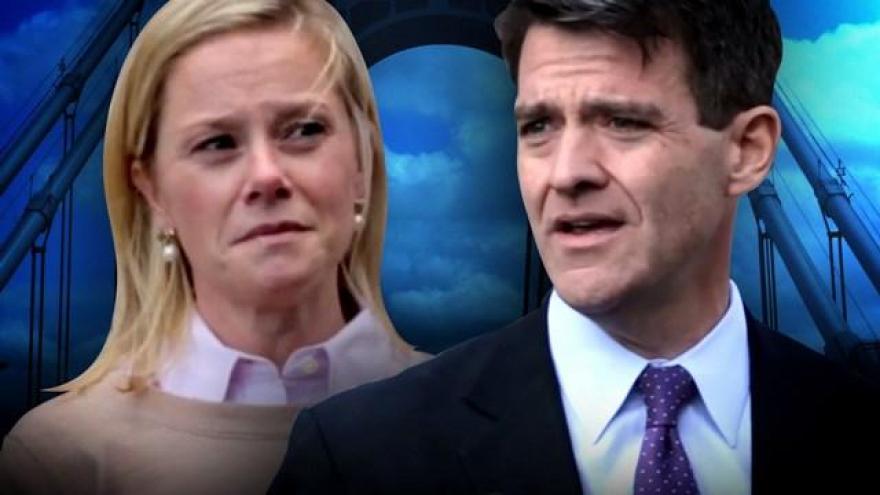 (CNN) -- Two former officials linked to New Jersey Gov. Chris Christie's office were sentenced Wednesday in the Bridgegate case for using their power to close lanes on the George Washington Bridge in 2013 in an act of political revenge.

Both also received a year of supervised release, 500 hours of community service, and fines.

In her sentencing of Baroni, Judge Susan Wigenton called the crimes "an outrageous abuse of power." During Kelly's sentencing, Wigenton said the case "culminates another unfortunate chapter in the history of New Jersey.

"It is very clear to me that the culture in Trenton was, if you aren't with us, you're against us," Wigenton said.

The sentences came months after Baroni and Kelly were found guilty on seven counts in November, including conspiracy, fraud and civil rights deprivation.

"I let the people in Fort Lee down," Baroni said in federal court in Newark.

Kelly's voice was shaking and cracked several times as she spoke in court Wednesday afternoon.

"I never intended to harm anyone," she said. "I accept full responsibility for the tone of my emails and text messages."

The charges stemmed from the abrupt closure of local traffic lanes on the George Washington Bridge, one of the world's busiest bridges, for four days in September 2013. The lane closures on the bridge, which connects Manhattan with Fort Lee, New Jersey, caused severe traffic delays that endangered citizens and posed a public safety risk, court documents state.

Prosecutors alleged the lane closures were part of a deliberate effort to punish the Democratic mayor of Fort Lee, who did not endorse Republican incumbent Christie in his 2013 re-election bid.

The prosecution had recommended both Baroni and Kelly serve near the bottom of or just below the federal guidelines of 37 to 46 months in prison, according to court documents. In court, prosecutors agreed with the defense to lower Baroni's recommended sentence to 24 to 30 months.

William Fitzpatrick, acting US Attorney of New Jersey, praised the court and said the sentences were fair and reasonable in a news conference afterward.

In separate statements, defense attorneys for Baroni and Kelly said they plan to appeal the case. Kelly, in a short statement, said the "fight is far from over."

"I will not allow myself to be the scapegoat in this case, and I look very much forward to the appeal," she said.

Christie was not charged with a crime in relation to Bridgegate. After the defendants were found guilty, he released a statement saying he was "saddened" by the case and repeated once again that he had no knowledge of the plot to close the lanes.

Still, the scandal tainted what had been one of the most popular governorships in America and later helped sink Christie's fledgling presidential campaign.

'Time for some traffic problems'

Emails and text messages released in January 2014 formed the basis of the charges. In one email, Kelly told former Port Authority official David Wildstein, "Time for some traffic problems in Fort Lee."

Kelly later said her messages contained "sarcasm and humor," and she said that a day before sending the email, she had told Christie about traffic problems resulting from a study.

Baroni and Kelly's actions cost the Port Authority $14,314.04, according to court documents, including the cost of hours misspent by Port Authority personnel and the expense of a traffic study that was ruined by the closure.

Baroni testified he believed the closures were part of a legitimate traffic study, an explanation that had been relayed to him by Wildstein, the accused mastermind of the incident. Wildstein, Christie's high school classmate and longtime ally, pleaded guilty to one charge of conspiracy to commit fraud on federally funded property and one civil rights violation.

The prosecution recommended the court sentence Baroni and Kelly to serve time in prison, not only because they were found guilty but also because prosecutors believe a prison sentence would send "a clear and unmistakable message."

The court documents state, "When dealing with public corruption, only imprisonment can effectively promote general deterrence."

"As both Baroni and Kelly surely understood given their lengthy tenures in New Jersey government, crimes committed by public officials are particularly insidious because they destroy the community's faith in its own public institutions," the documents state.

In all, four Christie-associated political figures have been convicted of criminal charges in relation to Bridgegate, including Baroni, Kelly, Wildstein, and former Port Authority Chairman David Samson.