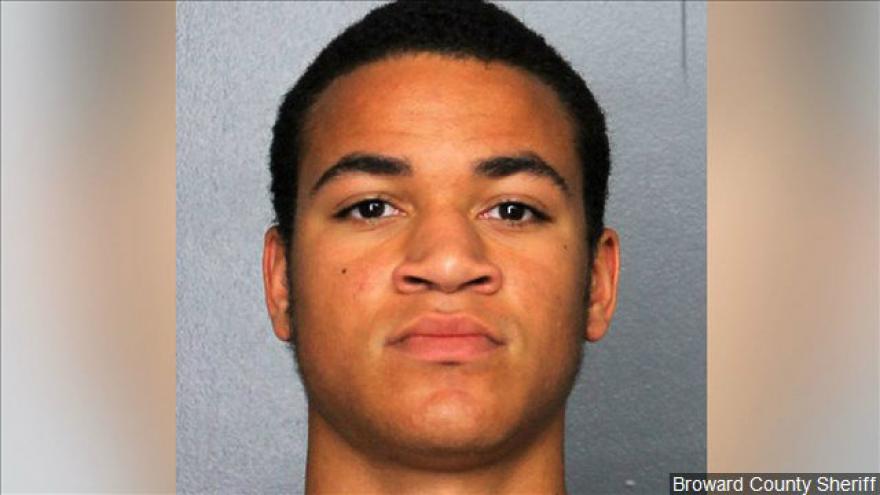 (CNN) -- The brother of the Parkland, Florida, school shooter is suing several Broward County officials, saying they violated his Eighth Amendment rights and tortured him during a recent stay in jail.

The lawsuit was announced about two hours before Zachary Cruz appeared in court Thursday afternoon for a probation violation hearing.

Cruz admitted to driving without a license, prosecutors said. He will be released on supervised probation for another five months, after getting credit for time served.

CNN has reached out to the defendants for comment. The state attorney's office said, "No comment," and the sheriff's office said it wouldn't comment on ongoing litigation.

The suit alleges Mollica issued an exorbitant $500,000 bail for Cruz based on his older brother's crimes, while jail officials intimidated and harassed Cruz, deprived him of sleep and forced him to wear a restraint vest around the clock.

"After he posted his $25 bail, authorities conspired to hold him in custody, reset his bond to an excessive $500,000, and then engaged in a campaign of intimidation and torture once he was in the Broward main jail facility," said a statement from legal rights group Nexus Derechos Humanos.

In a news conference Thursday, Mike Donovan, the group's president and CEO, said Cruz was subjected to "horrific constitutional abuses."

Once Cruz was taken to jail, according to the suit, Green ordered that Cruz be admitted to a mental institution, despite his records saying he had no mental issues, and despite Cruz behaving reasonably and cooperating with officers during his arrest.

A medical report stated that Cruz had no telephone or car, risked "being released to the streets" and had the community on edge, according to the lawsuit.

The 18-year-old spent five days at the Broward Health Medical Center, which released him without prescribing any medication. Doctors decided Cruz "did not display the signs of a mentally disturbed person," according to the lawsuit. Rather, he "was noted as being pleasant, cooperative and alert," it said.

"Reported sadness was temporary and not clinically troubling," the suit said.

Once he was returned to jail, Cruz was placed on 24-hour suicide watch, and Green "assigned a 'one-on-one' deputy to intimidate Cruz," the lawsuit alleges. He was forced to wear a heavy suicide jacket and endure 24-hour "bright lights," the lawsuit said.

"The sleep deprivation tactics, including the use of intimidating and harassing behavior by guards, the use of a restraint vest 24 hours per day, and the use of 24-hour intense lighting, are procedures that amount to torture under the Geneva Convention, and are behaviors we do not permit soldiers to use in the battlefield," the Nexus Derechos Humanos statement said.

Because of these conditions -- which also included daily visits to a nurse who repeatedly told him, "You're not OK" -- Cruz accepted a plea deal "only to escape this treatment," the lawsuit said.

Cruz was arrested March 19 on a misdemeanor trespassing charge for skateboarding on the campus of Marjory Stoneman Douglas High School in Parkland, where his brother fatally shot 17 people on February 14.

At a March 29 court hearing, the younger Cruz was sentenced to six months' probation. He was also ordered to wear a GPS monitor, to stay a mile away from the campus and to have no contact with any of the Parkland victims, their family members or his brother.

According to the lawsuit, these conditions are too burdensome for Cruz. Denying him interaction with his friends at the high school "removes a major source of social support," and cutting him off from his brother "deprives Cruz of his ability to seek understanding and solace from his family during a difficult time," it said.

According to an arrest warrant, Cruz violated his probation Saturday by operating an SUV without a driver's license and by being close to a school where he was not enrolled.

Cruz was spotted early Saturday afternoon about 25 feet from a parking lot for Park Vista Community High School in Lake Worth, Florida, according to law enforcement documents. The warrant cites two possible probation violations: One demanding he refrain from breaking any laws and another mandating Cruz must avoid school campuses.

At the court hearing Thursday, prosecutors said there wasn't enough evidence for the second charge, because Cruz wasn't technically on the campus.