Brothers Bar and Grill sued for a bar tab discrepancy 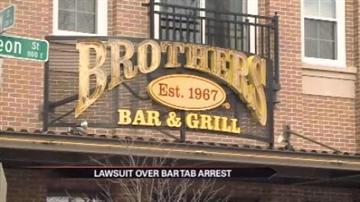 SOUTH BEND, Ind.--The city of South Bend and Brothers Bar and Grill are facing a lawsuit because of a bar tab.

According to documents obtained by ABC 57 News, the victim claims he was thrown in jail for 12 hours because of a misunderstanding.

In the court documents filed with the Saint Joseph County superior circuit court back in August 2012, a South Bend man claims he was arrested by an officer because the bar manager said he didn't pay his bar tab.

The incident began with some incorrect charges on a bill and then, according to the court papers, a miscommunication between the bar manager at Brothers and a South Bend Police Officer led to the arrest.

The documents are based entirely on the the allegations of the plaintiff, South Bend resident Sam Calobrace.

Calobrace claims his bill was incorrect and his credit card was charged for drinks that he did not order.

Frame, the manager on duty, told Calobrace that the manager who settles bill disputes would not be working until the following day.

The documents say Calobrace agreed to discuss the issue with the correct manager and attempted to leave. That's when he was confronted by off-duty police officer Mark Szweda.

According to the complaint, Szweda brought in uniformed officer, Brian Meador-- who has since left the South Bend Police Department.

The court documents say Meador talked to Frame, who said Calobrace did not pay his bill. When Calobrace showed the officers his receipt, the officers disregarded it, and according to the lawsuit, arrested Calobrace without interviewing him or reading him his rights.

Calobrace claims he was imprisoned for 12 hours before he bonded out.

The charges were later dismissed and Calobrace was refunded when it was determined that he had indeed paid his bill.

ABC 57 News talked briefly to Szweda who says he cannot comment on the case.

ABC 57 News also reached out to the South Bend Police Department, the South Bend city attorney and Brothers Bar and Grill but have not yet heard back.