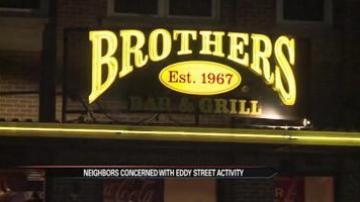 SOUTH BEND, Ind. --There has been a lot of concern about crime surrounding Notre Dame recently. There was a meeting Wednesday night at the Robinson Center to talk about how to combat all the crime.

It was a full house at the Robinson Center as the South Bend Police Department, Notre Dame officials, council members, city workers, and residents talked about the crime problem right on the outskirts of Notre Dame.

One of the big issues brought up at the meeting was Brothers Bar, which has taken a lot of flak for alleged gang activity surrounding the bar and patrons leaving debris and acting rowdy when they leave.

So now Brothers is jumping into action to help the community curb the crime.

One other change that neighbors around Eddy Street Commons are pushing for is restricted parking.

There will be no street parking between the hours of 10 p.m. and 6 a.m. forcing bar patrons to park in the garage.

“If they could do something with the parking, that would probably help a lot,” said Phillips.

Ferlic says gang activity around Brothers will be eliminated easily.

“We can chase the gangs away,” said Ferlic.

Ferlic said he is confident crime can be curbed in South Bend.

“You wait and see in one year.  This is going to be a different community,” said Ferlic.