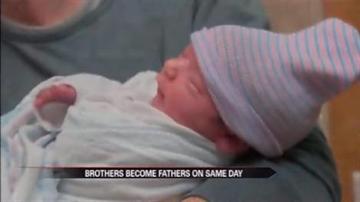 Their wives gave birth within an hour of each other at the same hospital just down the hall from one another.

One baby came a day early and her cousin nine days early.

"Beth and I came here this morning not knowing they were here. So I sent my brother a text message saying we were in the hospital and he tells me they were already here for a couple of hours," said one of the brothers.

Now the two couples joke about the one conversation they had when they realized they were pregnant at the same time.