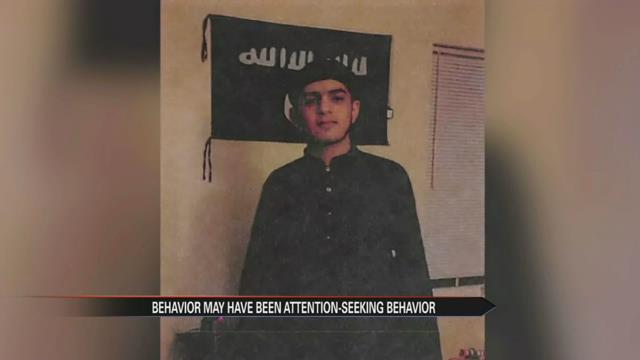 New details emerged today about the Indiana teen that was arrested Tuesday for allegedly wanting to join ISIS.

Police raided his apartment as neighbors watched in wonder.

“It shouldn`t surprise anybody that we`ve got somebody here in Central Indiana that`s interested,” remarked Peter Beering, Terrorism Expert.

“What is a bit abnormal here is what the influences were, who may have been involved and exactly the lengths that this kid was willing to go to try to go to a far away place to join the cause as he saw it,” continues Beering.

According to the criminal complaint given to us by the FBI, the investigation into Akram Musleh started in 2013 after it was discovered Musleh had posted terrorist-related videos to YouTube.

FBI agents met with Musleh and “took steps” with his school Brownsburg High School to try to sway Musleh from radical extremism.

However, Musleh continued activities that caused concern. In September of 2014, Musleh purchased an ISIS flag online.

In April of 2015, police in Brownsburg responded to an incident in Williams Park, where it was alleged several youth had been trying to recruit other teens to join Daesh, which is another name for ISIS.

FBI later determined that one of the people who had asked youths if they wanted to join ISIS was Musleh.

In June of 2015, Musleh attempted to travel to Turkey on a passport that expired in August.

After suspicions arose as to his intentions in traveling to Turkey, FBI conducted and authorized search of Musleh’s bag and found a journal containing quotes from several individuals who are known to be or know to have terrorist ties including Usama Bin Laden.

Musleh also engaged in multiple online conversations with suspected terrorists including one where he considers committing an act of violence on U.S. soil.