Buchanan leads pack in Battle of the Fans 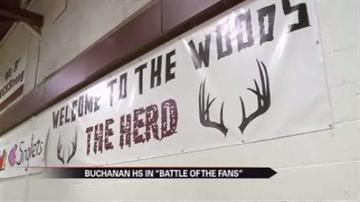 BUCHANAN, Mich. -- The Buchanan Bucks are one of the five finalists in the Battle of the Fans poll from the Michigan High School Athletic Association. For the students and staff at Buchanan High School, a victory in this competition would be a triumph over tragedy.

"We are the Buchanan Bucks, we call ourselves the herd. The gymnasium here as you can see is called the woods,” said sophomore Sam Swem.

Fear the deer. With only 457 students, the Buchanan Bucks are among the smallest schools in Michigan.

Right now the Bucks are among the top five finalists for the Michigan High School Athletic Associations’ Battle of the Fans.

"In the past it was always pretty good pretty solid. But like this year we just took it to a whole other level and just went crazy this year,” said senior Aaron Pastryk, Dilan Shearer’s cousin.

In June 2012, one of the most dedicated fans, junior Dilan Shearer died in a car accident.

This year's student section is his legacy.

His death shook the small town to its core.

"One of the main things about Springsteen and the quote is, funny how a memory sounds like a melody so when you hear that song, you're just instantly reminded of Dilan,” said junior AJ Reed.

Buchanan's main goal in their student section is to be loud, organized and positive. They've eliminated all of the taunting and negative chants or songs from their cheering.

Click here to vote
Battle of the Fans
Welcome to the Woods: Small town, big hearts