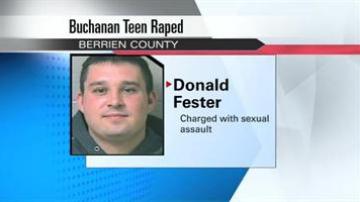 Police say after the media showed images of the suspect, they received multiple tips and led to his arrest.

"I've been here all my life about 44 years and I have never heard anything like this in a small town like this," said Mullen. "Like why would someone do that to a young and innocent person?"

Police say Fester picked up a 14 year old girl at Red Bud Trail and River Road, then drove her to two separate locations where he sexually assaulted her.

Fester appeared before Judge Wiley in the Niles Courthouse Wednesday.

Judge: Do you understand these charges sir?

Fester: I believe so, yes.

He faces two counts of sexual assault to a victim less than 16-years of age.

Felony charges that could land Fester on the sexual offender registry if convicted.

He pleaded not guilty.

Fester is married and pictured on Facebook with a toddler.

Judge: Where do you live sir?

Fester: I was living in Buchanan but now I can't go back so I'm not sure as of now.

Judge: Okay who were you living there with?

Fester: My wife and her parents.

Fester asked for a public defender and the judge gave him a 24/7 curfew.

Fester can only leave his home for his new job as a snow plow driver for Sunscapes Inc. out of Niles.

We could not find any previous arrests for Fester in Indiana or Michigan.

He will be in court again on December 6th.