Buchanan remembers one of its longest serving firefighters 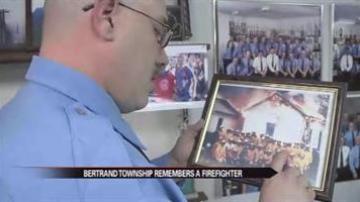 For Cory Nichols, losing a best friend is never easy.

"He was the type of hero that did not want recognition," Nichols said.

The death of his buddy and mentor Jim Pugh is especially hard hitting though; because Pugh is one of the reasons he decided to become a firefighter.

"He was a mentor to some, a teacher to others, and a friend to everyone," Nichols said.

Pugh is one of the longest serving firefighters in Bertrand Township history.

His 25 years for the department was chalked full of action and awards.

"I'm going to miss seeing him walk around in his Bertrand Fire Department jacket, with his dog at his side," Nichols said.

He said Pugh was a model firefighter who prided himself on being humble.

Nichols said he'll miss pouring those cups of coffee Jim enjoyed so much.

"The man loved his coffee," Nichols said. "It was pot after pot after pot, and whether or not he spoke to you while was drinking the coffee or didn't, you knew Jim was there."

That presence will felt in the department's firefighters for many years to come.

"They want to help people, and they want to save lives," Nichols said. "That was Jim to a tee."