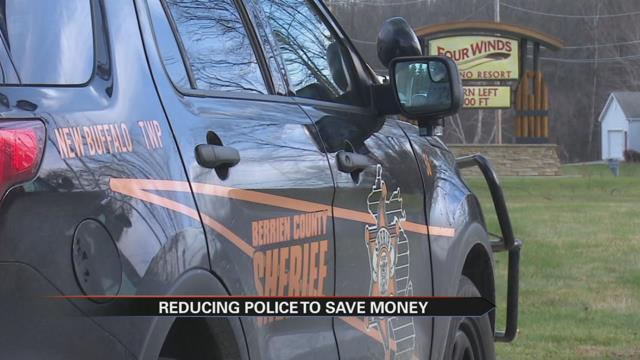 Starting next week, the number of police officers patrolling New Buffalo Township will be shrinking.

“They will not be continuing to cover the 70 percent of our police coverage,” New Buffalo Twp. Supervisor Michelle Heit said.

A budget cut is being made by the board that oversees where revenue from the Four Winds Casino in New Buffalo goes throughout the local area.

The 70-percent cut has left Heit with no choice but to do away with round-the-clock policing in her community.

“When we had the 24/7 coverage, [it] was covered by five police officers that were assigned only to the township,” Heit said. “That will now be three officers, and how that [schedule] will look, we’re not sure.”

The slimmed down force goes into effect Monday.

It shrinks a contract New Buffalo Twp. has had with the Berrien County Sheriff’s Department since the Four Winds Casino opened in 2007.

A ‘local revenue sharing board’ oversees the casino’s finances that go back into Berrien County, and board members recently decided the $400,000+ funding policing in the township no longer qualified as a ‘specific and actual cost.’

Heit said she is now putting together a public safety millage proposal she hopes will pass in May to make up for the cuts.

“The security of knowing, you know, that there is somebody out there 24/7, just kind of gives you more of a peace of mind for the business and at home,” Ashlee Wilson said.

She supports the millage idea, and she thinks other township members will too.

“It’s something that’s needed,” Wilson said. “There needs to be police out during the day and the night just to make sure that everything’s safe and sound. And I think that the community will do what they need to do to vote yes for it.”

The details of the millage proposal are not yet complete, but Heit said it “will not be a huge amount.”

Despite these changes, Heit said the township is very thankful for the money it has received from the casino and the board throughout the last few years.