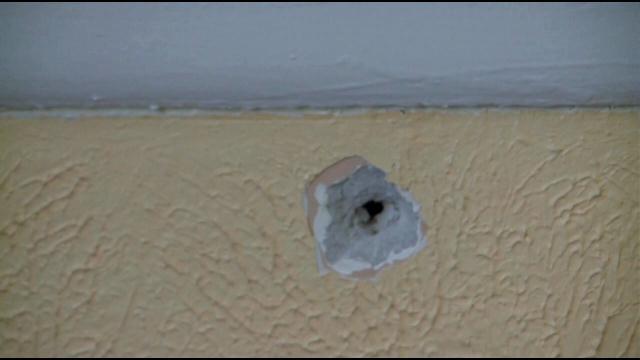 In the month of December there were 15 gun related incidents concentrated in the center of the city of Elkhart. On Sunday around 7:15 p.m. another incident that occurred on the 300 block of Fremont Street was added to that total.

Stray bullets hit two houses in Elkhart and police are wondering if the shots were intended for those homes or if they were innocent bystanders.

“Oh two, I listened to two and the third one came in right there,” says Higinio Valera.

“I saw the guys with the gun and then I see a woman go into the house and then the other guy running down the street,” says Valera.

Although Valera says he saw someone running way, his neighbor tells a different story.

“I don't know it was a drive by. Yesterday he came and picked me up and he was parked right there that's why there is glass right there and when they came around they shot at the car,” says a neighbor whose house was also shot at and who did not want to be named.

“Different people they spoke to say they saw different things. So we don't know if they were shooting at a person and missed or if they were intentionally shooting at one of these two residents,” says Snyder.

Valera adds that he is more than willing to help the police with information he has.

“If I see something that's not right I'll call the police. The police, they know me,” says Valera.

Valera keeps a close eye on his neighborhood to make sure his most valuable possessions are safe.

“I'm scared because my grandsons I have two right here and everyone is over here playing and usually there are around here watching TV. I'm scared because when you hear something that is coming into your house like a gun or something and I am very scared,” says Valera.

Police say detectives are investigating and think a red vehicle could have been involved in the incident. Any information regarding this case can be directed to the Elkhart Police Department.
Share this article: