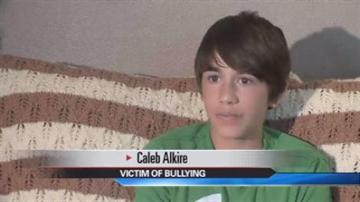 NILES, Mich. -- Some victims of bullying lash out in acts of violence. Some take their own life. Some, like Caleb Alkire, speak out about what has happened to him in hopes of getting his message to other victims.

Caleb Alkire is a just a normal twelve-year-old boy. He's got a strong arm and a solid basketball shot.

He’s also a victim of bullying.

"One incident where my head got slammed into the window of the bus, and sometimes everyday people will trip me. Another incident where they kept on kicking me,” said Caleb.

Photos from his mother's cell phone show the physical toll it has taken.

She's more worried about the emotional one.

She and her husband are actively involved in helping Caleb cope.

He attends Oak Manor Sixth Grade Center, a school of 250 kids, all trying to find friends and hold their own in the hallways.

“I feel like I'm the only one getting bullied in my hallway,” said Caleb.

Principal Molly Brawley wants Caleb to know he's not the only one.

She said she's working to improve adult awareness inside the building and added cameras to the district's school buses to protect kids like Caleb.

His mom says it's helping, but she wants more parents involved

"Speak up, get involved with the school, talk to anybody you can, don't back down,” said Kassie.

Caleb isn't backing down. He was given the option to finish the school year at home and chose to go back.

"I've always been a firm believer that adversity introduces a person to themselves and I really think that he found out who he is,” said Brent Ruff, Caleb’s father.

Caleb said his message for anyone out there dealing with bullying is that it will stop. The bullying will end

In the meantime, keep on going to the teachers, parents, coaches, boss, or any trusting adults nearby and they will be your ally.