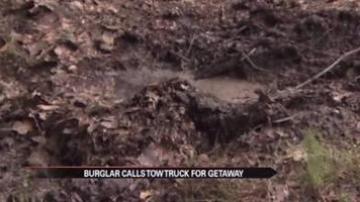 After attempting to flee the scene of a crime, police say the burglar got stuck in mud and called for assistance.

Police say he told the tow truck driver he was helping his aunt move.

The pick-up was loaded with TVs, electronics, cameras and jewelry he had just swiped from a nearby house.

The tow truck driver said that the suspect never gave away that he had just robbed a house.

Just moments after the burglar was towed from the mud, the guy sped off through the front yard.