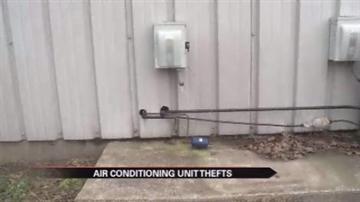 SOUTH BEND, Ind. -- Business owners are sweating it out after a string of burglaries targeting commercial air conditioning units. Nearly a dozen buildings in the Nimtz Parkway area have been hit.

According to police, sometimes these units are turned in for scrap and cash.

Other times, the units may be sold to a vendor who can then sell the unit to another company.
At one of the businesses hit, Adams Remco, it was the fourth time an air conditioning unit was stolen from the building.

The company has another location in Elkhart and air conditioning units have been stolen from there four times as well.

Police say this probably won't be the last time these burglars strike.

"When we see a rash of them hit one spot, chances are it'll move on, it's really not one of those instances where it happens in one place and we don't see it again. If it happens once in one spot, we'll see it drift all over the area,” said Captain Phil Trent of the South Bend Police Department.

Adams Remco and Pixelcreek Technologies say these units are covered by insurance but it does cost the company about $3500 every time a unit is stolen.